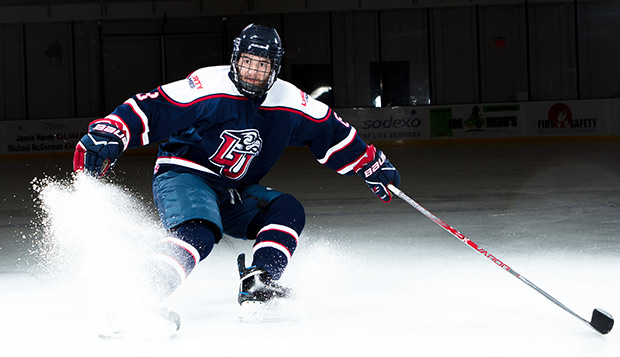 "Josh did an excellent job of picking the captains," Handy said. "They will be a great representation of our team and I'm really looking forward to working with the four of them. All four guys understand what it is to be a successful student-athlete at Liberty. All four guys have a great work ethic and want to push the program to where we all want it to go. They are guys that are passionate about Liberty Hockey and want Liberty Hockey to be the best it can be."

Schartz said the three alternate captains will follow Hamilton's lead on and off the ice.

"Josh is going to be a great captain," Schartz said. "He's a hard worker who leads by example and shows the guys what it takes to win. Expectations are really high for the team. Everyone wants to win a national championship and no one wants to win more than the four of us … and that's going to trickle down. We're going to try to pound that into the entire team this year, having a winner's mentality."

Garvin, who returned for his fourth season of eligibility with the Flames as a graduate student, has maintained a leadership role since transferring from Holy Cross as a sophomore. He said Bierema and Schartz are excellent additions as alternate captains, assuring the Flames have a captain on the ice at all times.

"Zane's a great person, a great hockey player, and another leader on the team," Garvin said. "He's probably a little more vocal than I am in the room. Tim is one of the older guys in the room and is experienced through Liberty Hockey. He's been a leader on the DII team since he's been here."

Bierema, who was called up from the Flames' DI squad last spring, expects to make a smooth transition to his new leadership role.

"It will be a little bit of a jump, but I'm ready for the challenge and the guys are, too," he said. "This team has been building up for years and there's a special feeling in the locker room right now. We have a lot of on-ice talent, a good group of character guys, and we bring a good work ethic every day. So we're excited to get the season rolling and seeing what we can do."

He said the captains and coaches have high expectations and will keep all of the players accountable in their pursuit of excellence.

Garvin said the Flames abide by the "One Team, One Dream" mission statement written on their wall.

"We want everyone to step up and be leaders," he said. "It's a collective group of guys and we all have the same goal. We want to grow spiritually, succeed academically, and we want to win an (ACHA DI) national championship."

Garvin meshed well with sophomore forwards Quinn Ryan and Brock Thompson at the end of last season when that line emerged as the team's most prolific scoring unit. He expects all of the Flames' lines to produce and for all 25 players on the roster to contribute in pivotal ways.

"Even with the new guys that we have, everyone's hanging out together and we're all like best friends; they're fitting right in, taking on their roles, and being selfless for the team," Garvin said. "Everyone is involved, whether they're on the ice or vocal in the locker room, and they've bought into our goals."

This weekend, the Flames will participate in another Warrior Fellowship training camp led by the Fellowship of Christian Athletes (FCA) Hockey at the Hydaway Outdoor Recreation Center's Challenge Course.

"Last year it was a good experience for the team," Schartz said. "It's great at the beginning of the year to have the guys come together leading into the first game. There's a lot to be taken from it and we're going to make the best of it."