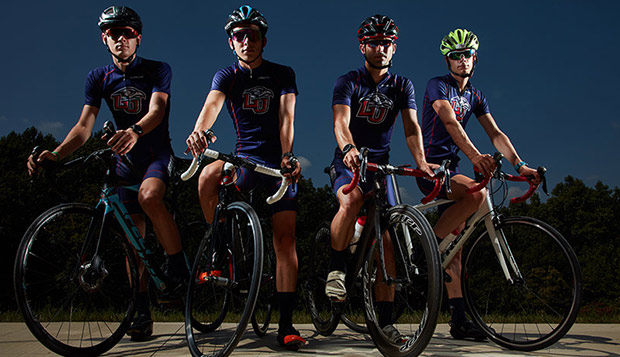 Even before they have an opportunity to attend their first classes at Liberty University, incoming freshmen triathletes Joan Colino from Spain and Akos Takacs from Hungary will compete for the Flames and their respective countries at the Aug. 18-27 International Triathlon Union (ITU) Multisport World Championships Festival in Penticton, British Columbia.

They will be joined by junior triathlete Greg Schott and Flames Head Coach Parker Spencer, who will represent both Liberty and Team USA after flying to the westernmost Canadian province on Thursday night.

The four triathletes will sport jerseys featuring their national flag colors — and large Liberty logos in the middle of the chest — while racing in different divisions of World Championship events.

"We are going to be one of the only collegiate programs in the world to have this many athletes at a world championship event," Spencer said. "That shows that we are not limiting ourselves to collegiate races, but we have the ability to compete in races around the world at the highest level."

Colino will compete in Saturday's 9:45 a.m. (PCT) Junior Sprint Duathlon, a 5-kilometer run followed by a 20K cycling stage and 2.5K run. Takács, the Hungarian Junior Cross Triathlon champion who placed in the top 20 at the European Cross Championships, will race in Wednesday's Junior Cross Triathlon, which starts with a 1K open-water swim and concludes with a 12K mountain bike stage and a 4K trail run.

Spencer will compete in the 25-29 age group division of the Sprint Duathlon, Saturday's first event starting at 6:30 a.m. (PCT), before Schott, who also competes professionally on the XTERRA circuit, will race in Wednesday's Under-23 Cross Triathlon.

Spencer, who will be racing in a duathlon or triathlon world championship for the sixth consecutive year, has also qualified to compete with junior triathlete Travis Fehr at the Sept. 10 Ironman 70.3-mile World Championships in Chattanooga, Tenn.

Many of Liberty's offseason recruits — both American and international triathletes — bring equally impressive credentials to the program, joining Thomas Sonnery-Cottet, a sophomore from France, on a men's team that Spencer believes is primed for unprecedented success. The Flames could challenge for titles at both the Mid-Atlantic Regional Championships, which Liberty will host for the fourth straight year at Smith Mountain Lake on Oct. 14, and the USA Triathlon Collegiate Nationals in Tuscaloosa, Ala., in April.

"The firepower we have on the team, compared to any other year, is on a whole new level," Spencer said. "Teams that win championships have a lot of depth, a whole squad pushing each other. That way, if one guy has an off day, someone else can pick up the slack. That is what we have created on this year's team. We have an incredible amount of depth, especially for the spring when Giovanni (Bianco) from Italy will enroll as a graduate student." He is a 2015 age-group national champion.

Spencer said he has been flooded with interest over the summer from prospective student-athletes for Liberty's three endurance sports programs.

"People are hearing about Liberty triathlon and men's swimming & diving and cycling," he said. "In the last week, I've been getting almost more inquiries than I can handle — kids from the United States and all over the world, including a former junior world champion triathlete from Spain. These are athletes that absolutely have the potential to go to the Olympics and that is my goal for the program. We want to be the best collegiate program in the country and to produce Olympic champions."

Spencer said the Flames' training facilities — including the Liberty Indoor Track Complex, which opened in January, the new world-class Liberty Natatorium, due to be available for use in November, a new cycling studio in what was formerly Johnny's Grill in the Liberty-owned Candlers Station shopping center, and a Human Performance Lab run by the Exercise Science program in the basement of the Center for Natural Sciences — give them a leg up on the competition.

"We have the best training facilities in the world and everything we need to be a very successful program," he said. "The administration has given us the resources to make it happen and we've recruited the athletes to make it happen."

In July, Spencer attended an Elite Coach Development Program held at the Olympic Training Center in Colorado Springs, Colo., where he gained valuable insight on how to apply scientifically based training techniques at these facilities.

Just this week, Spencer landed another triathlete who has qualified to represent Team USA at the World Championships — Bobby Hammond, who graduated from high school in New Jersey in 2016 before moving to Colorado Springs to train full-time with Peak Multisport.

"He's an incredible triathlete who has been ranked in the top five (nationally) in his age group since he was 12," Spencer said, noting that Hammond is an Olympic Distance (1.5K swim, 40K bike, 10K run) specialist and will challenge for the top position on the team. "I've been recruiting for three years now. He can swim faster than Thomas (Sonnery-Cottet) and will give him a run for his money on the bike."

Hammond has his sights set on competing in the 2020 Summer Olympics in Tokyo, Japan, and the 2026 Ironman (140.6-mile) World Championships in Hawaii.