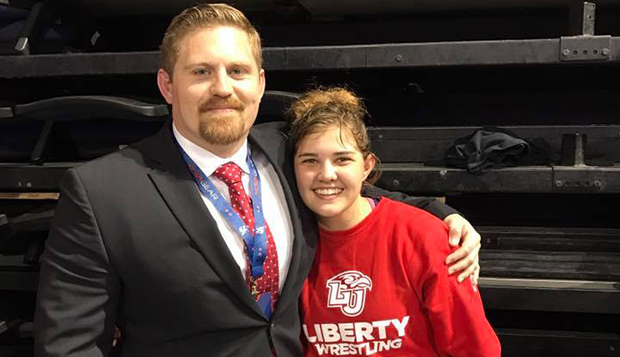 It's no secret that rising sophomore Cendall Manley, the defending NCWA 170-pound national champion from Hawaii, will be the centerpiece and cornerstone of Liberty University's first-year women's wrestling team, which will make its debut in 2017-18 under Head Coach Jesse Castro and Assistant Coach Josh Travers.

"Right now, she's the team," said Travers, a former Flames NCWA All-American heavyweight. "She is probably going to be a four-time national champ. She's been ecstatic to come back and keep reaching the top of the podium."

Manley served as manager for the men's wrestling team before Castro and Travers, who knew of her background in Hawaii, asked her if she wanted to compete. She jumped at the chance and Travers volunteered to serve as her coach.

"The best part about Cendall is she's not satisfied until she gets better on the mat," Travers said. "She came up to me after the bravado from winning the national championship subsided and said, ‘Yes, it was good, but I could have done this better.'"

Travers has hit the recruiting trail during the offseason to try to lay a foundation for the fledgling program, but most of the interested female wrestlers he has found are rising seniors in high school.

Girls wrestling is a high school sport in Travers' home state of California and he has been in contact with his former prep coach. There is also a thriving female wrestling culture in Hawaii, which Travers is looking to tap into with Manley serving as Liberty's liaison.

"It has been an interesting offseason, now that we have the support of Club Sports, which is amazing," he said. "We're basically creating a team out of another team and we're working on the funding to determine how many tournaments we're going to travel to."

He does plan to hold open tryouts in January and hopes to have a handful of women on the team —possibly enough to fill the seven weight classes from 98-191 pounds — by the time the spring semester rolls around.

"It'll be a constant open tryout," Travers said. "We want to continue to build interest. I'm glad Coach Castro has decided to oversee both teams to help me out. He restarted Liberty wrestling (in 2006) so he knows better than anyone else how to start from scratch."

The Lady Flames will travel to compete in three or four tournaments, including the NCWA National Duals and Grand National Tournament in Allen, Texas, where Liberty's men's team is the reigning runner-up.

"Women's wrestling is still a work in progress, even at the NCWA level," Travers said. "More and more teams are joining every year, but wrestling on the East Coast is more of a male-dominated sport. Having a women's team is something that's going to take off. It's the next big thing for the wrestling community. I'm excited."

He noted that two medalists at women's wrestling Summer Olympic debut in 2016 in Brazil came from the United States.

Travers would like to see the Lady Flames eventually join the Women's Collegiate Wrestling Association (WCWA), where King College (Tenn.) is a powerhouse. They would have to learn a different wrestling technique, however, as the WCWA promotes freestyle wrestling compared to folkstyle used in the NCWA.