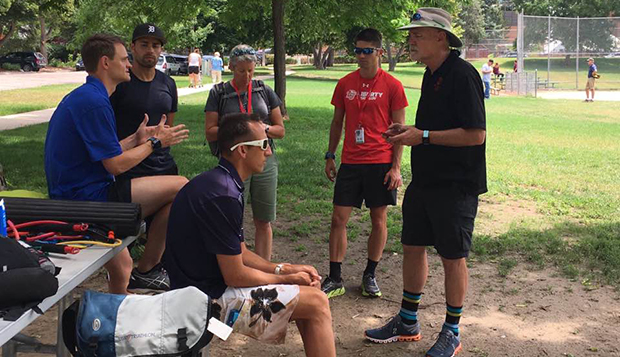 Parker Spencer (in red) listens to Bobby McGee, an Olympic running coach, along with the other participants in last month's Elite Coach Development Program.

"It was a pretty packed 10 days, and an incredible opportunity," Spencer said, noting that he went through an application process concluding with phone interviews before being selected to participate in the training camp. "It felt like I was taking an intensive at Liberty, with 16-17-hour days that included physical training of athletes and lectures covering techniques and the mental aspect of the sport to international triathlon rules. I was able to learn from some of the top coaches in the world and work with many Olympians," including triathletes Gwen Jorgensen and Katie Zaferes, who competed in the 2016 Summer Games in Rio.

Among the coaches he studied under were Bobby McGee, a six-time Olympic running coach from South Africa with more than 30 years of experience in endurance coaching; former United States OIympian Barb Lindquist, who was the top-ranked professional triathlete in the world from 2003-04; Derick Williamson, who co-owns the Durata Training cycling company and formerly worked as a professional triathlon coach for Carmichael Training Systems in Colorado Springs; and Australia native Jarrod Evans, now one of USA Triathlon's elite high performance coaches.

Two of the other students were collegiate triathlon coaches at Georgia Tech and the Naval Academy with the others coaching established high school and club programs in North Carolina and New York City.

Spencer, who is a certified Exercise Physiologist through the American College of Sports Medicine, said the training camp's goals were to identify United States triathletes capable of contending for medals at the Summer Olympic Games as well as American-born coaches who could help them to achieve that goal.

"We worked with specialists at the U.S. Olympic Training Center, including exercise physiologists," said Spencer, who graduated with a bachelor's degree in Exercise Science from Liberty in 2012 and is pursuing a master's degree in Exercise Science with a concentration in Human Performance . "It was a great educational experience, just being able to be there and be around that Olympic environment. I learned a lot of new things that we'll be integrating into the program, which is exactly why I wanted to go there."

He said Liberty's training facilities, including those available at the new Liberty Indoor Track Complex and the Liberty Natatorium, opening this winter, are even more advanced than those at the Olympic Training Center. Spencer and assistant coaches Megan Merryman and Scotty Curlee, who also earned Exercise Science degrees from Liberty, plan to elevate the team's training programs for elite triathletes, cyclists, and swimmers this school year by expanding a partnership with Dr. Jim Schoffstall in the Exercise Science department's Human Performance Lab.

"(Schoffstall is) always looking for student-athletes to work with in the test lab, so it is going to be a win-win for them and a win-win for us," Spencer said. "We have athletes from all over the world that are coming here to get expert coaching at world-class facilities, and we want to make sure they are getting the best training they could possibly get anywhere in the world. We will be able to offer them comparable training that an Olympic athlete would get at the Olympic Training Center."

The Human Performance Lab features stationary bikes programmed to simulate cycling on specific race courses with corresponding elevation changes; an altitude chamber, which monitors oxygen levels when athletes are acclimating to higher elevations; a Bod Pod, which tests body composition, muscle composition, water weight, and body fat; a lactate-testing machine, and a VO2 machine, which determines how much oxygen an athlete is taking in and using.

"We will be targeting their training to improve their fitness, applying science to use it to our advantage," Spencer said.

Liberty has also purchased altitude tents for a select group of team members to sleep in this summer. The tents are connected to tubes that pump in nitrogen, activating a hormone in the body that naturally produces the protein Erythropoietin (EPO), which in turn creates new red blood cells. The athletes wear pulse oximeters to make sure the oxygen level in their blood stays at or above 93 percent and when those levels reach 97 percent, the nitrogen levels are increased to simulate altitudes 500 feet higher.

"Sleeping at a high altitude and training at a low altitude is the best," Spencer said, noting that the University of Colorado's location, 6,000 feet above sea level, has helped its triathlon team become a powerhouse. By contrast, the average elevation in Lynchburg is 400 feet above sea level. "Just living in Colorado is giving them a training advantage."