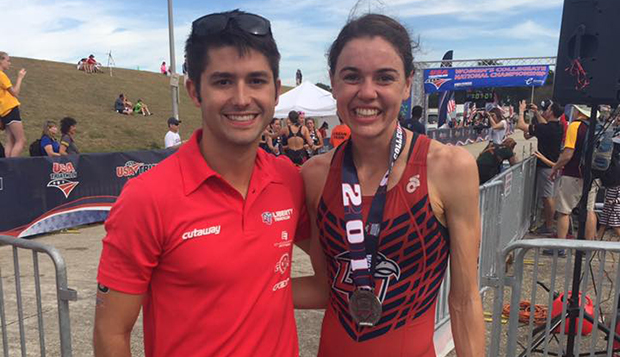 As Liberty University's Club Sports endurance program — which includes men's and women's triathlon and cycling, and men's swimming & diving, debuting this fall — emerges as one of the most competitive in the country, three-sport Head Coach Parker Spencer has added a fourth assistant, former women's triathlon standout Megan Merryman ('17), to his staff.

"Megan is very excited to stay associated with the team and to take on a more significant leadership role," Spencer said of Merryman, who will complement Van Phillips, a top mechanic at Bikes Unlimited in Lynchburg, Cinematic Arts Assistant Professor Scotty Curlee, and Heath Grinshaw, who will serve as an assistant swim coach. "We felt it was important to have a woman as a part of the coaching staff and Megan's leadership over the past three years on the team has been incredible."

Merryman, who officially starts on Tuesday, currently works as a personal trainer at the Lynchburg Downtown YMCA — where she started her first triathlon, the Angels Race, in the spring of her freshman year in 2013.

By the end of her three-year career with the Lady Flames, she had placed sixth overall as Liberty's first representative in the NCAA Division I women's collegiate triathlon Draft-Legal Sprint National Championships, held Nov. 5 in New Orleans.

She concluded her Liberty career by placing 13th among women at the USA Triathlon National Championships' Draft-Legal Sprint and 16th in the Olympic-Distance race, April 21-22 in Tuscaloosa, Ala. That was just six weeks after she fractured her collarbone on a fall in the cycling stage of the Clermont (Fla.) Draft-Legal Challenge.

"I definitely saw improvement every semester I was with the team and am excited about getting to learn more from (Spencer), his thought behind how he develops our training programs, and long-term plans," Merryman said. "I honestly believe anyone can (reach the level she did) if they're willing to work hard."

Liberty's men's triathlon and cycling teams have taken off over the past two seasons with Spencer at the helm. He is confident the addition of Merryman will help increase recruitment of women triathletes, who may also compete on the cycling team.

"The rise of NCAA women's triathlon makes the market for recruiting triathletes for women much harder because there are so many more scholarships for women than there are for men," Spencer said. "It will be a bit of a rebuilding year on the women's side as opposed to the men's side, and Megan will play a significant role in the rebuilding."

He said Merryman will be a model triathlete for other women in the program to strive to emulate.

"Megan didn't have a background in the sport and we developed her into the triathlete she is today," Spencer said. "Megan has a lot to do with the way the culture on the team is today. It is a fun culture, but it is also a hard-working culture."

Merryman will primarily travel with the triathlon team to races throughout the season, as well as leading some of the strength workouts, personally coaching and training athletes, and helping with administrative tasks such as scheduling road trips.

Her presence on staff will be especially critical in the spring semester, when races and meets involving the triathlon, cycling, and swimming & diving teams will occasionally coincide over the same weekends.

"The fall semester is already going to be pretty intense, but completely manageable," Spencer said. "The spring semester will be a bit crazy with the cycling team gone almost every weekend. With our assistant coaches having other jobs, sometimes they can't get off work, so having a fourth coach attend those events is ideal."

He said all three teams will seek to peak at their sports' respective national championships, scheduled for successive weekends spanning late April and early May.

"We will really be focusing on bringing a team into nationals that will win a national title, really for all three, but definitely for triathlon," Spencer said.