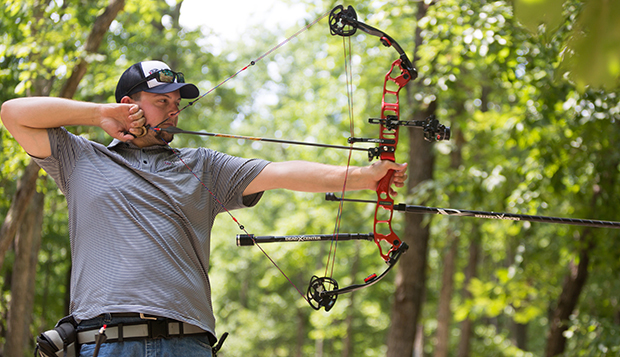 Ian Rigney is the most decorated archer in Flames program history with three 3D outdoor and one indoor national title in his quiver. (Photo by Kaitlyn Becker Johnson)

It has been a summer of transition for Liberty University's archery team, with new 3D outdoor and indoor shooting ranges in the works and a new head coach in place.

Ian Rigney, a former four-time national champion for the Flames over a career that spanned from 2012-16, served as a graduate assistant under Head Coach Mitch Reno for the past three semesters before officially being named his successor this week.

"Mitch is staying on staff until Nov. 1 to help with all the paperwork and to make sure it's a smooth transition for the student-athletes," said Rigney, who also serves on the support staff of Sycamore Baptist Church in his native Gretna, Va., and works full time at the Food Lion in that small town.

He plans to guide the team along the same trajectory as Reno launched it — with sights set on impacting the archery world for Christ and adding to the team's collection of eight individual national titles.

"For the first year, I would like to get us another national title," Rigney said. "We've had eight in the past seven years, but nobody's won one since I won our first indoor title in the Spring of 2015."

Rigney, who received an undergraduate degree in Theology and Apologetics through the Rawlings School of Divinity and will complete his Master of Divinity in Theology next month, has a long-range vision for the program and plans to stay on staff until the Lord redirects his path.

"Another one of my goals for the team is to develop the consistency of the coaching staff," he said. "I'll be the fourth head coach over the last five years, so changing coaches has made it hard to keep winning national titles. I hope to stay on long-term and to see all of these plans through."

He fully expects God to continue to bless the program and its participants as they stay focused on Christ and leave the results in His hands.

"Whatever they do, they should do it for the glory of God and the benefit of their school," Rigney said.
"We want to set ourselves above the competition as a Christ-honoring school, glorifying God through our practices and our competitions. What really sets us apart from other college teams is that we pray before we compete in national and regional events. Every time before I take a shot, I say a prayer to put myself in the mindset that I'm doing my best to glorify God, whatever the outcome."

He will give team members plenty of competition in practice to bring out their best when firing under pressure.

"I have high expectations for them and will try to prepare them for shooting against (archers with more experience)," Rigney said.

Facilities for Liberty's new Club Sports shooting teams — under construction across the street from the entrance to the Hydaway Outdoor Recreation Center — will also feature 3D, field, and indoor archery ranges.

"We've got a field range that's almost complete up there, then we've got 25 acres for our 3D practice range and a building going up as well," Rigney said. "When that's all competed, we'll have a permanent facility and the sky's the limit."

For this Fall semester, the Flames and Lady Flames will practice at a 3D course set up for last weekend's Virginia Commonwealth Games competition and an indoor range at the Liberty Equestrian Center.

"Our indoor range is near the stands in the grand equestrian center arena, and we are in the process of getting approval to use the outdoor range there to practice" for the Oct. 27-29 United States Collegiate Archery (USCA) 3D nationals in Foley, Ala., Liberty's first official competition this fall.

He is excited about a returning corps of 16 archers and expects to fill out a roster of 30, having already heard from a dozen incoming freshmen interested in trying out for the team in early September. Practices will take place two nights per week and the team will travel to two local events in Hurt, Va., and Bedford, Va., which will help determine the 15 archers who will travel to compete in Alabama.

The 3D bowhunting division will again be Liberty's strongsuit, led by senior Jason Lynch — who won the bowhunter division at the Commonwealth Games — and junior Spencer Foster on the men's side and sophomores Emily Mullins and Madison Melton among the women.

"We're definitely focused on quality over quantity," Rigney said. "A lot of the competitors on our team are on an equal level, scoring and skill-wise, so it will take some tough decision-making from Mitch and myself to determine who we take to Alabama."