Manitoba Junior 'A' forward Bochinski to join Flames this fall 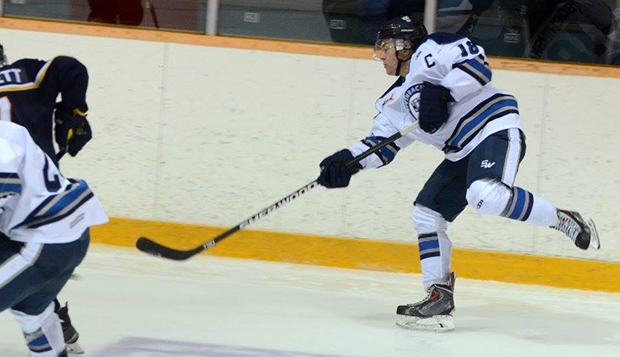 Jordan Bochinski, a forward who played the past four seasons with the Steinbach Pistons in the Manitoba (Canada) Junior "A" Hockey League (MJHL), is the fifth incoming freshman in Liberty University's ACHA Division I men's hockey 2017-18 recruiting class.

"We are definitely excited to have Jordan," Liberty Head Coach Kirk Handy said. "He is another forward to add to the mix and a great all-around leader. Jordan has got a great personality, someone who fits in the culture of Liberty hockey. He is a guy who battles hard, who has a great work ethic, and is someone who is going to put his team first and push every day to make himself as good as he can be … and continue to push the rest of the guys on the team to be at their best."

Bochinski, who joined the Pistons as a high school senior, had a breakout season last year, when he was designated the team's captain and netted 21 goals and distributed 25 assists in 59 games.

Currently in his third summer serving as a counselor at a True North Youth Foundation youth hockey camp in Winnipeg, Bochinski considers himself a catalyst, both on and off the ice.

"I am a high-energy guy who brings a lot of speed," he said. "I'm not super physical, finishing every play with a check. I like to try to have as much of a touch on the puck so I can contribute offensively. I'm more of a playmaking forward, but I do mix in physical play and stay on the body to get myself in the game."

He has spent much of his summer in the weight room bulking up his 5-foot, 11-inch, 190-pound frame and said his speed enables him to have a balanced presence on both ends of the ice. He credits Manitoba Pistons coach Paul Dyck for strengthening his defensive skillset, as well as molding his leadership style.

"The biggest thing I improved as a captain last season was developing as a vocal leader and forgetting the past, moving on, and staying positive," Bochinski said. "I am a pretty outgoing guy and I love to keep things positive, keep things light and have fun with it because at end of the day, we are blessed to have such an opportunity and we are all in a pretty cool place."

He hopes to set a good example in on- and off-ice workouts that will translate to competitive play.

"That kind of attitude is huge on a team, always pushing each other in practice," Bochinski said. "You become the best by practicing and playing against the best, to keep sharpening each other up."

"He gave up hockey for football and had a chance to go play pro as well, but he ultimately turned that down," Bochinski said, noting that his father encouraged him to pursue his hockey career.

He has yet to visit Liberty but has taken virtual online tours of the rebuilt campus and Athletics facilities as well as the renovated LaHaye Ice Center, led by new ACHA DII men's hockey Head Coach Ben Hughes.

"I love meeting new people and cannot wait to meet the guys and everybody involved in the program," said Bochinski, who plans to study kinesiology to prepare for a physical education career. "I am very excited for the opportunity and can't wait to become a Liberty Flame."