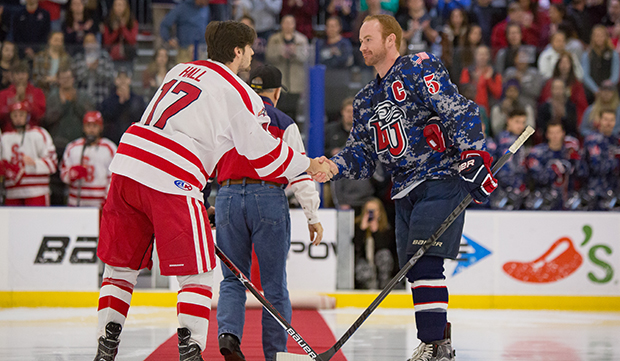 "It is a really awesome opportunity, pretty surreal," Hughes added. "It will be a whole new experience and it will be a challenge, but I'm really excited about it. I'm so thankful and humbled that they trusted me to be part of the leadership."

Before transferring to Liberty as a junior in 2014, Hughes played for the Chicago Steel of the United States Hockey League as a senior in high school in 2009 and for four North American Hockey League teams in Washington state, Texas, North Dakota, and Wisconsin from 2010-12.

"Ben played at a high level of hockey, in the USHL, and he understands Liberty University and what it takes to be successful at a high level in the ACHA," Handy said. "He has a great plan he wants to put in place to show how our teams can be successful in the classroom, on the ice, and off the ice."

Hughes, who finishing his bachelor's degree through the School of Business with a concentration in Human Resource Management last year, plans to complete his Master of Business Administration (M.B.A.) in December. He is eager to launch his coaching career and stay involved in the sport he has played his whole life.

"I fully believe in everything we have going on here as a program and am really passionate about it," Hughes said. "I have a passion for the guys and building relationships with them and helping them develop as players and continue to grow spiritually at Liberty. If the guys are getting better in school, better in their relationship with the Lord, growing mentally, physically and with hockey, and spiritually, I will have done my job. That's my passion, and the outcome of games will be an extension of that."

Hughes wants to maintain the work ethic instilled by Lowes, who coached the team for the past nine seasons, and to implement systems consistent with those used by the DI and DIII squads.

It will be a transition year not only for Hughes but also for the DII men's team, which graduated approximately half of its roster and the majority of its starters from the squad that advanced to the finals of the past two ACHA DII National Championships.

Hughes will soak up all of the wisdom he can from Lowes and outgoing DII Assistant Coach Mike Morrison (Club Sports' director of internal operations), as well as continuing to lean on Handy and Associate Head Coach Jeff Boettger for mentorship.

"We believe Ben's going to be set up for a great season," Handy said. "Ben is coming in at a good time — with change coming and a brand new up-and-coming group of players on the team — where he can forge his way into coaching and I truly believe that they will respond to Ben in a great way. He is well prepared, someone who cares very deeply for his teammates when he has been a captain and I truly believe he will be a fantastic coach. Ben likes to have accountability and likes to push players, which are great qualities for him coming in as a head coach."

Hughes spent time with the Flames coaching staff during Liberty's Recruitment Camp held over College For A Weekend (CFAW) in April and has a good idea of who will be coming back.

"There will be a lot of new faces on the team, and some familiar faces as well that we can rely on for sure," he said. "We will have a really good group of guys coming in, though you never really know who is going to be on the team until after (preseason tryouts in August.) I plan to set really high expectations. Even with the number of guys we're losing, there's no reason we cannot continue to have success. My goal is to compete every night, to get better every day, and to enjoy the process of development. The scores will take care of themselves."

Hughes' assistant coaching staff will be finalized in the near future. 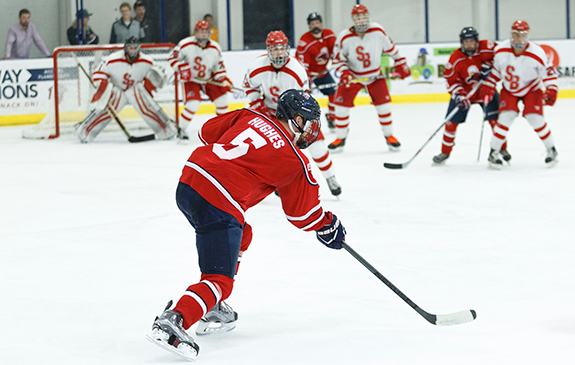 Ben Hughes, a three-year defensesman for the Flames, launches a shot against Stony Brook.