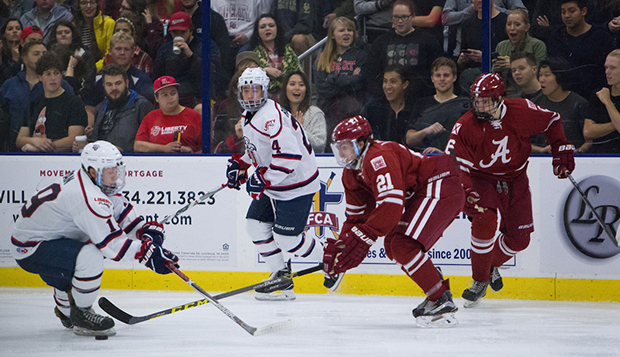 The Flames faced Alabama in last year's first 'Midnight Mayhem' matchup, Oct. 1, 2016, at the LaHaye Ice Center, and will host the Crimson Tide four times in 2017-18, starting with a Sept. 15-16 season-opening series. (Photo by Caroline Cummings)

Besides raising the number of ESCHL members from six to eight teams, the addition of Syracuse and New York University — which is transitioning to the DI level after defeating Liberty's DII team for its second national championship in three years — has made the Flames' schedule more challenging.

"It'll be fantastic," Handy said. "Syracuse and NYU definitely add strength to our schedule and strength to the conference."

That will make it more difficult to clinch the ESCHL's lone automatic bid to the ACHA DI National Championships, awarded to the regular-season champion.

Liberty will host Syracuse on Oct. 13-14 before traveling to play New York on Nov. 17-18, for the teams' only season series while playing four of the other five conference foes — all but Rhode Island, Oct. 20-21 in Providence, R.I., — four games each.

After opening their season Sept. 15-16 at home against Alabama, 22 of the Flames' next 26 games in 2017-18 will be against conference opponents, with the only non-conference contests against 2017 ACHA DI runner-up Ohio on Oct. 27-28 and Indiana University of Pennsylvania on Dec. 8-9 at the LaHaye Ice Center.

"It's going to be our goal at the start of the year to not only win the regular season but also the tournament championship," Handy said. "We have the opportunity to earn the right to get back to nationals and to win the ACHA DI National Championship. We have the team to do that and we're going to work hard every day to get better."

Liberty will host the ESCHL tournament in 2019 and the Flames will play 22 of their 34 regular-season games at LaHaye this season.

"That's going to be a huge advantage for us," Handy said. "We took a big step forward last year and we're looking forward to continuing that for next year, to see how we can continue to build our program into a national champion."