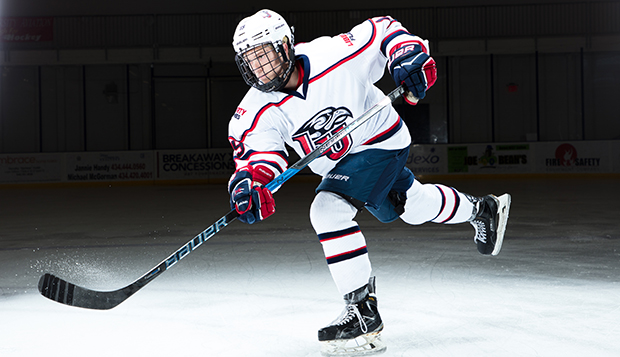 Two Liberty University players were recognized on the All-ACHA Division I men's hockey teams for their performances throughout the 2016-17 season. Sophomore defenseman Zane Schartz was selected to the All-Athletic Second Team while freshman forward Quinn Ryan was one of seven players to receive All-Rookie Team honors.

Schartz deflected the honor to the rest of the Flames' players and coaches, who are eager to return to the ACHA DI National Championships after being upset in the first round by 17th-seeded Colorado State.

"My teammates and supporting cast around me helped me a lot this season," said Schartz, who hopes to make the first team next year. "It's a blessing for the team and anything I can do to get Liberty's name out there is good because we want to make an impact in the hockey world.

"We're hoping to have more team success next season, to make a stronger push at nationals," he added. "That's the team's goal and the better I do, the better the team does. Personal success will turn into team success; they complement each other. I just want to win a national championship. That's all I care about. If I can make the team better, I've done my job. It's a team game, not an individual game. Personal accolades don't really matter. It's all about winning and I just want to win."

Ryan, the Flames' second-leading scorer as a true freshman, is Liberty's fifth player to be named to the All-Rookie Team in five years. Last season, Schartz made the team. In the 2014-15 season, forward Jake Hannon, who signed to play for the Pensacola (Fla.) Ice Flyers after ranking second in ACHA DI in scoring in 2014-15, was at the top of the list. Forward Robert Ward also was selected to the squad in 2013-14 after defenseman Steven Bellew, who graduated last year, made the cut in 2012-13.

"It's a great honor to be named to that list of great players and to be compared to them," said Ryan, who scored 18 goals and distributed 27 assists in the regular season. "All the credit to goes to my coaches and teammates who helped me to accomplish what I did this year. They encouraged me and set me up for this opportunity."

Ryan is excited to be reunited with his linemates next season, with graduate forward Grant Garvin — Liberty's leading scorer for the past two seasons — deciding to return for a final year of eligibility.

"He's a great player and I had a privilege to play on his line most of the year," Ryan said. "Our line definitely had a good year and got better as it went on as we developed chemistry, with (freshman) Brock (Thompson) joining us. We're excited to continue what we did last year."

e said Schartz, who netted 18 goals and added 24 assists, was an excellent complement to the Flames' front lines.

"Zane's a great a defenseman and he displayed the skill he has to be in the top three in scoring," said Ryan, who led Liberty with nine power-play goals, one more than Schartz. "He's a great all-around player and definitely led us in shots on the power play."

Schartz said with players like Ryan returning, getting back to the ACHA nationals and contending for the tournament title is a "more attainable and reachable goal for us."

"Making it to nationals this season gives us a taste of what it takes to win there," he said.
"With the 15 freshmen coming back, and the new recruits coming in, we can learn from last season and move on."