After launching coaching career at LU, Bourdon moving on 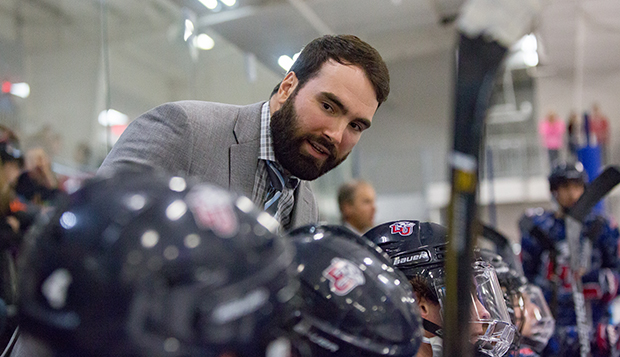 Marc Bourdon leans over on the bench to advise players on Liberty's ACHA Division I men's hockey team. (Photo by Caroline Cummings)

When his NHL career with was cut short by multiple concussions, Marc-André Bourdon revived his passion for hockey and grew in his newfound faith as an assistant coach on Liberty University's ACHA Division I men's hockey team over the past two seasons.

This summer, Bourdon will return to his roots to serve as an assistant coach and assistant general manager for the 16-20-year-old Rouyn-Noranda Huskies of the Quebec Major Junior Hockey League (QMJHL). He starred for the Huskies from 2006-08 and was named the QMJHL's Defenseman of the Year in 2008 before being selected by the Philadelphia Flyers in the NHL entry draft. Bourdon bounced back and forth between the AHL's Adirondack (N.Y.) Phantoms and the Flyers, where he played 45 games in the 2011-12 season before retiring at 25 in 2014.

"Three years ago, I didn't want anything to do with hockey anymore," Bourdon said. "Two years ago, God was calling me here to coach at Liberty and to study as well. The more I'm coaching, the more I'm loving it. You never know what God's got in store for you, and now, I'm going back to my home, to create guys who can get to the highest level of hockey, to prepare them for life, (and) to be a light."

Bourdon, who grew up outside of Montreal, played three seasons for the Huskies in Rouyn-Noranda, a mining town with a population of 41,000 located seven hours to the northwest of his hometown.

"That's where I played junior hockey, so it's like family there for me," Bourdon said. "At home, hockey is like football here. Everybody plays hockey and the caliber of the league is really good. Fifty-five percent of the players get drafted into the NHL."

He was designated as team captain for two of those seasons in 2007 and 2008, making his return exciting for the Huskies' fan base.

"They're really proud of what's happening there because, for the city, it's a big deal," Bourdon said. "I love my job, but I'm a humble guy. I'm not trying to act like a superstar. I try to talk to everybody I can and work hard."

Bourdon traveled back to Montreal last week and watched a tournament that featured some of the best Junior AAA players in Canada, to help assess their talent and select the Huskies' under-16 squad. He will return to Rouyn-Noranda for the draft for the 16-20-year-old team in June before arriving for the Huskies' training camp at the end of August. The QMJHL's season starts in mid-September and extends through mid-March before the playoffs.

Bourdon plans to finish his interdisciplinary studies degree through Liberty's online programs, focusing on biology, exercise science, and behavioral science, concentrations that he expects to help him in his coaching career.

For his responsibilities as general manager, he will draw upon his experiences and knowledge of the sport, as a player at every level and assistant on Liberty's staff, where he mentored many of the Flames. Being bilingual in English and French will be beneficial in working with players who speak only English.

The team has a chaplain from Hockey Ministries International, but it can be a difficult culture for a player or coach to lead others to Christ.

"People don't talk about faith, or live that way," Bourdon said. "It's not a comfort zone. If people open up or if God gives me an opportunity to share about my faith, I will. Going to church and living differently is the best way to be a witness."

He plans to develop players' performance on the ice while helping them to grow personally and spiritually, as Liberty Head Coach Kirk Handy, Associate Coach Jeff Boettger, and Assistant Coach Dan Berthiaume did for him over the past two years.

"They have been really close friends and spiritual mentors," Bourdon said. "All three have spiritually impacted my life and are friends forever.

"God's in my heart and I know Jesus never lets you down," he added. "I want to train other players to be diligent in their faith, putting things in place so they don't stumble. That's my mindset and that's what I desire, to find ways to put them on the straight path."

Bourdon plans to stay in contact with Liberty's staff, returning to Lynchburg to help lead summer hockey camps. He may have opportunities to send Huskies players who don't get drafted to the NHL or AHL to play for the Flames in the ACHA.