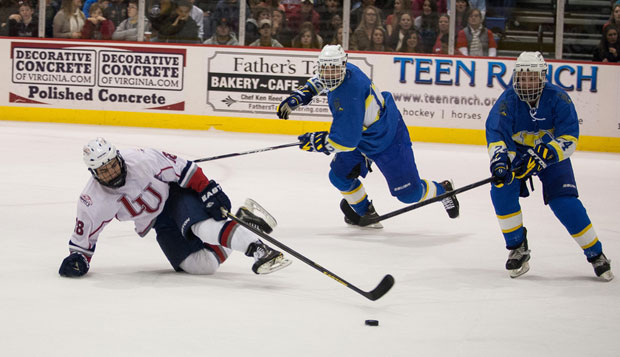 Two minutes into Saturday night's game, the Liberty Flames Division I men's hockey team was behind 2-0 to the University of Delaware, defending American Collegiate Hockey Association national champions. Though the Flames battled to compete, the Blue Hens capitalized when Liberty could not, and UD coasted to a 6-3 win, an encore to a hard-fought, much closer 2-1 victory Friday night at Liberty's LaHaye Ice Center.

Reigning ACHA Player of the Year SJ Broadt made his season debut in goal for the Blue Hens Saturday, returning from a foot injury suffered last season. Broadt played through the injury en route to the national title, earning him the honor.

Just 20 seconds after the opening faceoff, Delaware put up the first goal of the night. Hardly a minute later, the Blue Hens were up two as Ryan McDonald scored on a breakaway.

The Flames looked to have finally woken up after the second goal, picking up their intensity and firing more shots on goal. But Delaware put another one in the net at 13:39.  Not a minute later the Flames responded with a breakaway goal by Andrew McCombe, on the assist by Ryley Egan. As if unaffected, Delaware continued its first period onslaught with another goal, scored by Casey Jouaneau off the leg of Flames' goalie Blair Bennett, who came in to relieve Clayton Brown after goal three. Bennett made some heroic saves late in the period to keep the margin at 4-1 heading into the first break.

Liberty turned it up in the second, following Flames Head Coach Kirk Handy's admonition to take it one goal at a time. Danny Logan scored for the Flames two minutes into the period, assisted by Tyson Street and Paul Ingles. Liberty kept pushing and with 14 minutes on the clock, Christian Garland made the highlight play of the night with a sweet fake in front of the net, finishing through the five hole to slash the deficit to one at 4-3. Six minutes later the Hens snuffed the Flames' momentum with another goal.

The Flames had several opportunities to close the gap in the third period, but could not get past Broadt. On one series in particular, Liberty saw at least three openings and couldn't punch one home, but UD's Jouaneau took it right back and scored on the breakaway, completing a hat trick.

Next weekend Liberty will travel to Stony Brook, N.Y., to face the Seawolves for two games. Action begins at 8:30 p.m. Saturday night.