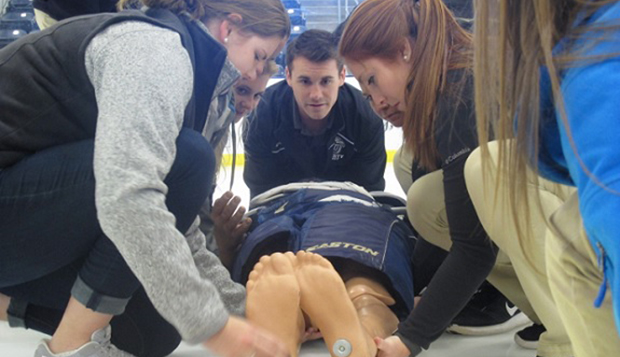 Athletic training students practice moving a manikin from the rink at the LaHaye Ice Center on Sunday afternoon.

"For the first year, it was a fantastic turnout and everything went very smoothly," said Angie Witt, sports medicine director for Liberty Club Sports, who directed the workshop with support from Lynchburg's Tom Bowman and Radford's Ellen Payne. "I thought it was a very productive day. It was definitely well worth it to make sure our athletic training students are well prepared when they do go out into the workplace. There's no way to experience it without practicing it."

While the majority of students attending were athletic training majors from Liberty, as well as Lynchburg and Radford, others came from as far away as Bridgewater College and Shenandoah University.

"It was geared toward schools that had athletic training programs as part of their education, and tailored toward equipment-intensive sports like football, hockey, and lacrosse and any type of emergency care needed in those sports," Witt said. "This was the first year we've hosted anything like this here and from the feedback I received, everybody really enjoyed it."

The workshop covered heat illness treatment in a half-hour class led by Jen Armstrong and Chris Hallberg, head athletic trainers at Lynchburg City high schools E.C. Glass and Heritage, respectively. That was followed by small group station rotations, led by Lynchburg College's Debbie Bradney and Tom Bowman, on how to properly remove a facemask, helmet, or shoulder pads from an injured athlete.

Witt then led a session, with support from her Club Sports athletic training staff, on traditional spine boarding for removing an injured hockey player from the ice. That was followed by another on using a vacuum mattress, a cushioned splint for the entire body, led by Radford's Ellen Payne from Radford. Lynchburg's Emily Evans and Brittany Smith then conducted clinical sessions on "advanced airways" and "CPR with a simulation manikin" before Dr. Mark Rolfs, an assistant professor in Liberty's College of Osteopathic Medicine, concluded the workshop by discussing the relationship between athletic trainers and team physicians and how they can work together to provide appropriate care for student-athletes.