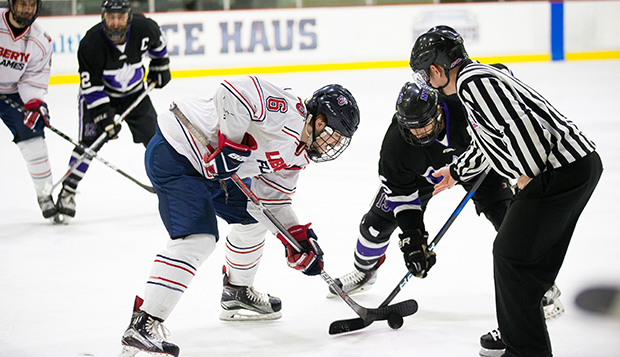 As a participant in this weekend's annual Liberty University Hockey Prospect Camp at the LaHaye Ice Center, ACHA Division II men's hockey junior forward Tim Bierema was not aware that he was one of the prospects that the Flames' Division I coaches were considering moving up to the next level. He found out on Friday about his promotion and is looking forward to the transition to the DI squad this fall.

"I'm excited to see what's going to be happening with myself and the teams next season," Bierema said Saturday morning. "It'll be a different year for the DII and DI teams. The DII team lost 13 guys, now 14, so it will be a little bit of a rebuilding phase and a good time for me to move up. There were a lot of freshmen last year on DI so I'm excited they're bringing me in to be one of the veterans. I'm not the most skillful guy out there, but I put in the work and have pretty good hockey sense."

Bierema, a rising senior, was the DII Flames' fourth-leading scorer last year with 25 goals (including a team-high 12 on the power play) and 18 assists.

"Tim's someone who we've watched play for the last two years and he's someone who brings quite a bit to the table," Liberty DI Head Coach Kirk Handy said. "He can play center, wing, kill penalties. He's 200 pounds, pretty good size, so he brings a physical component to our team. We're excited to have him join our team. He buys into the culture of what makes Liberty Unviersity special.

"He's got great leadership ability and a lot of great experience," he added. "He works hard every day, competes well, and he's got a fantastic attitude. He's got the skills to play at this level."

Bierema has already begun his preparation to make an immediate impact in the fall and expects it to be a natural progression, working alongside a talented group of linemates.

"I've talked to the coaches and know what I need to work on over the summer to be ready to go next semester," he said. "It's going to be a pretty deep team, with three or four lines that can go in every game, good defensive pairings, and a good goalie tandem. We're excited for next year. Hopefully, the guys will see the work ethic in me that will cause them to want to step up their games to the next level, too."