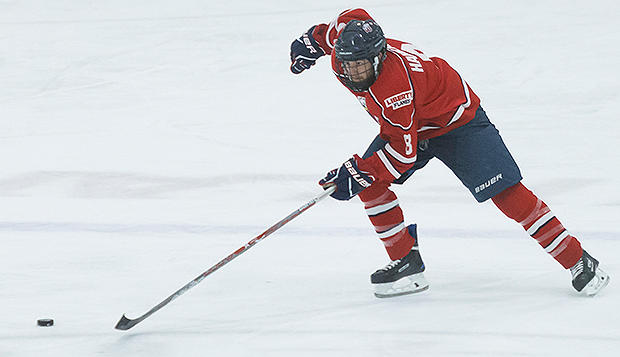 Freshman forward Josh Hamilton chases down the puck to start a fast break in a game at the LaHaye Ice Center. (Photo by Nathan Spencer)

Freshman forward Josh Hamilton, who ranked fifth on Liberty University's ACHA Division I men's hockey team in scoring with 15 goals and 15 assists this year, is the first player to be named a captain for the 2017-18 season.

"Josh has a lot of great characteristics," Flames Head Coach Kirk Handy said. "Had to battle to be in the lineup and he competed night-in and night-out for us this season. He's a guy who, by the end of the year, led by example as part of a strong nucleus that we have coming back next year."

Hamilton was thrilled to be offered the title of captain and understands the significance of the role he will play, as a leader on the ice and in the locker room.

"Absolutely, the responsibility is huge, especially being such a young guy," he said. "(The coaches) saw my work ethic on and off the ice and that was a big part of it. It's awesome they entrusted me with and I'm really honored. I have some large shoes to fill after (senior defenseman) Ben Hughes. He was such a great captain, so it's going to be tough, but I'm looking forward to the challenge. I'm excited and happy about it."

"It started off pretty rocky and I couldn't find my groove early," he said. "After Christmas break, things started to click and the puck started going in the net a little more often. It was definitely a good second half."

The team as a whole peaked toward the postseason, ending the regular season on a seven-game winning streak before winning the Eastern States Collegiate Hockey League (ESCHL) tournament title in its first season in the conference.

"The 10-game win streak, beating Davenport twice at home, and Stony Brook in the conference championship game was a highlight for the team and a fun thing to be a part of," Hamilton said. "Since we're such a young team, having 15 freshmen, we did well."

He will be one of the Flames skating with and against prospective players when Liberty hosts its annual Flames Hockey Prospect Camp over College for a Weekend (CFAW), April 6-9.

"I'm excited for the new guys coming in," Hamilton said. "It's definitely a great atmosphere to play in front of (at the LaHaye Ice Center) and it's definitely going to be a great year of growing stronger as a team and as brothers."

Handy expects to designate at least two other returning players as captains in the near future.