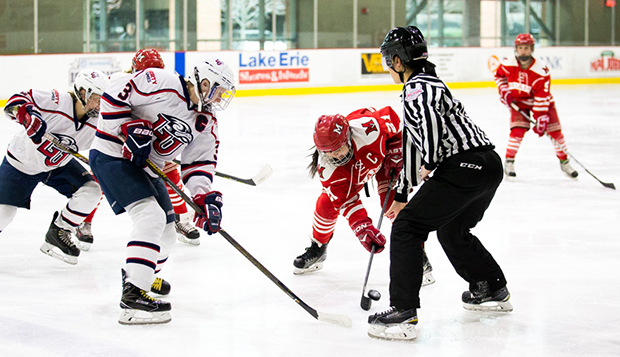 In a knock-down, physical battle between the two most dominant teams in ACHA Division I women's hockey, top-seeded Liberty University had its 15-game winning streak snapped by third-seeded Miami University of Ohio in Sunday's final of the National Championships.

The RedHawks (23-6-2) rallied from a 1-0 deficit to score four unanswered goals, including two empty-netters in the final two minutes of the 4-1 upset, to capture its third national title in four seasons. (The Lady Flames defeated Miami for their only ACHA DI crown in 2015 and swept the RedHawks at the LaHaye Ice Center on Jan. 19-20 to overtake the No. 1 ranking.)

Home-ice advantage favored Miami in the game played at the Ice Haus, the practice facility of the NHL's Blue Jackets in Columbus, Ohio. Experience was also on the RedHawks' side as they had several veterans on the ice against a Lady Flames lineup that included a few freshmen.

"The girls played good hockey and did well," Liberty Head Coach Paul Bloomfield said. "It's not the end result we wanted and I'm disappointed … but with 13 freshmen they did an amazing job to get here and to be national runner-up is phenomenal."

The championship rematch began as a goalie battle between Lady Flames sophomore Kelly Hutton, who was making her third straight start in net, and Miami's Emalee Wills. Liberty came out in full throttle attack mode, with freshman forward Vanessa DeMerchant, sophomore forward Lauren McDonald, and graduate forward Carrie Jickling each having quality scoring chances denied by Wills. She stood on her head, making 19 saves in the first period alone, including several with Liberty on the power play.

Then, in the second period, Miami cranked up its offensive unit with Kaley Mooney narrowly missing a backhanded shot from the left crease and Hutton taking a shot off the helmet before stopping a dangerous rebound by Rachel Booth under a defenseman following a shot from the left circle also blocked by Hutton.

"Kelly played a great game," Bloomfield said. "She's a trooper and she played her heart out. Goalies are the ones who take the brunt, but she did a really good job, showed a lot of maturity, and stood her ground."

Wills made another huge save for Miami, gloving a backhanded breakaway shot by McDonald, who had chased down a perfectly placed through pass down the center of the ice.

The Lady Flames (25-8-1) went back on a power play when Jickling had her stick hooked from behind on a short breakaway. That gave Liberty the advantage it needed for junior forward CJ Tipping's shot from the high slot, rifled through traffic and off Wills, who was screened on the play and let the puck slip in for a 1-0 Liberty lead with 10:50 remaining in the second period.

Liberty nearly tacked onto its lead with a three-on-one opportunity later in the second period before Hutton turned away shots by Moon and Katelyn Augustine. She then defended the near post on a wraparound shot by Booth, but it bounced off Miami teammate Nicole Matthews, stationed at the left post, where she stuck the loose puck into the open net with 3:30 to go in the period.

The Lady Flames, who outshot the RedHawks, 27-16, through two periods, entered the third and deciding frame tied at 1-1.

"I felt like first period we really outplayed them, but their girls, they've just got a lot of experience and they kept chasing us," Bloomfield said.

Miami killed a penalty to start the third period, with Jickling narrowly missing a two-on-one opportunity off a cross-crease pass from McDonald. Physical back-and-forth action characterized the period, with both teams checking opposing players into their own nets and McDonald taking some punishment from the RedHawks defense.

"Some of the girls were trying to make stuff happen and couple of times we weren't as strong as we should have been and it hurt us a little bit," Bloomfield said. "We ended up getting some penalties, and penalties always kill you. You can't be offensive when you only have four on the ice."

Relentless on attack, Miami got the back-breaker with 8:10 remaining in regulation when Mooney's shot was blocked by Hutton and ricocheted off Liberty freshman defenseman Holly Turner into the back of the net, for a 2-1 advantage.

Booth was taken down after colliding with a Liberty player, resulting in a RedHawks power play, killed by the Lady Flames' defense. With his team trailing by a goal, Bloomfield pulled Hutton for the final two minutes of play and Miami capitalized with two empty-netters, the last by Mooney, who intercepted an outlet pass and fired the puck into the cage from inside the red line.

Liberty, which entered the championship game as winners of 19 of its previous 20 games, experienced a heartbreaking end to its season, especially for graduate forwards Jickling and Catharine Burrell, who was sidelined by injury, and forward Courtney Gilmour, the team's only senior.

That youth bodes well for the Lady Flames next season, when they will try to extend their streak of ACHA DI Final Four appearances to six. Players stayed on hand at the Ice Haus after the closing ceremony to cheer on the Flames ACHA DII men's team as it contended for its first national title.