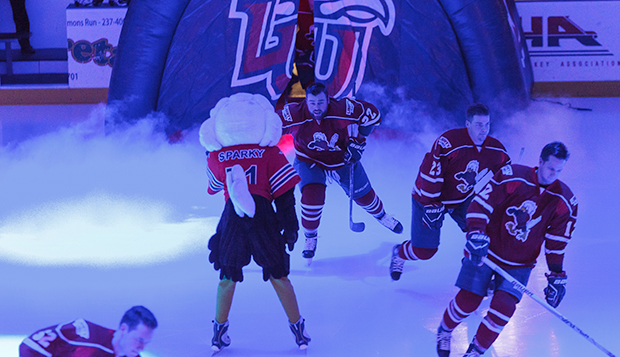 Sophomore forward Zak Hayes (back), the ESCHL Tournament MVP, comes out of the tunnel before the Flames' midnight game, Dec. 9 at the LaHaye Ice Center. (Photo by Nathan Spencer)

For the overall awards, Liberty received two ESCHL First-Team nominations and three All-Rookie Team selections, including freshman forward Quinn Ryan, who was named ESCHL Rookie of the Year after ranking second on the Flames and sixth in the conference in scoring with 18 goals and 27 assists.

He was joined by Liberty's third-leading scorer, sophomore defenseman Zane Schartz (18G, 24A), on the First Team, and by freshmen forward Josh Hamilton and defenseman Matt Cruickshank on the All-Rookie Team. Cruickshank was Liberty's lone representative on the All-Defensive Team while senior forward Grant Garvin, the Flames' leading scorer with 21 goals and 25 assists, was named to the ESCHL's Second Team.

Next year, the ESCHL will expand from six to eight teams with the addition of Syracuse University and New York University.

Coach of the Year

Rookie of the Year 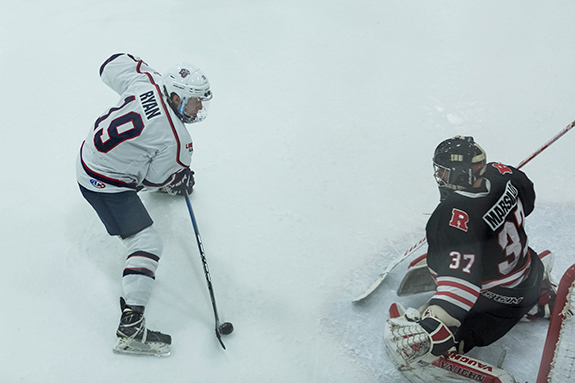 Freshman Quinn Ryan's lacrosse-style wraparound goal against Rutgers First-Team All-ESCHL
goalie Chris Marsillo on Feb. 11 was featured at No. 2 on ESPN's Top 10 Plays of the Day.