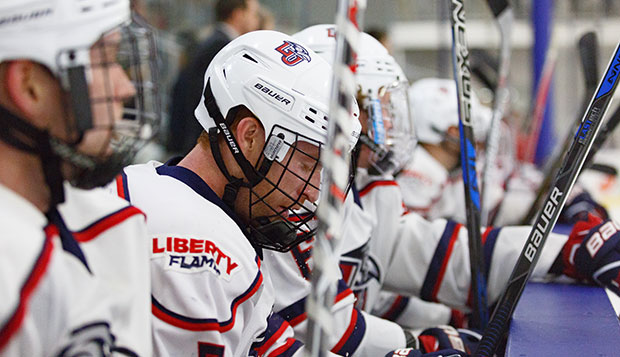 Liberty University's ACHA Division I men's hockey team dug itself a 2-0 deficit against Colorado State in the second period and couldn't quite recover, drawing within 2-1 and 3-2 before falling by a 4-2 final in Thursday's opening round of the ACHA Division I National Championships at the Ice Haus in Columbus, Ohio.

Liberty (29-13) threatened the Rams early, with freshman forward Jamie Crane hitting a post with a shot and CSU goalie Dax Dietrick making high glove saves of a shot on transition by sophomore forward Owen Harris and another by senior forward Colt Steele in the left circle. The Flames held a 10-6 shot advantage in the opening stanza, but the Rams started the scoring with 5:21 remaining in the period. CSU forward Jared Southwell, who scored just two goals in the regular season, netted two more against Liberty, with the first coming on a deflection of a shot by defenseman Brien Caseria that snuck past Liberty senior goalie Matt Pinel.

The Rams scored again on a power play just under five minutes into the second period when William Neff finished off a give-and-go pass back from Nicholas O'Donnell. CSU maintained its 2-0 lead until freshman forward Brock Thompson received a cross-crease assist from senior center Grant Garvin and pulled the Flames back within a goal with 1:34 left in the second period on a shot from the right circle over the glove of Dietrick.

Both teams were held scoreless for the next 15 minutes before combining for three goals in the final 6:20, with Liberty having another overturned.

Southwell stretched the Rams' advantage to 3-1 by ripping a shot from the high slot inside the left post before sophomore defenseman Zane Schartz, the Flames' third-leading scorer on the season, trimmed the gap to 3-2 on the power play by burying a blast from the point set up by Garvin and senior defenseman Ben Hughes with 2:49 to go. However, Austin Ansay answered for the Rams only a minute later with a quick counterattack down the right side, lifting a short-side shot over Pinel into the upper netting.

Liberty celebrated what appeared to be a third goal, which would have made it a one-goal deficit for the third time, with just under 10 seconds left off a shot by Steele from the right circle batted in by Garvin. But a high sticking penalty erased that score and sealed the Flames' defeat.

Liberty outshot CSU 35-23 for the game, but Dietrick made 33 saves, including some crucial ones in the third period, when the Flames held a 14-5 shot advantage.

The game was a rematch of an ACHA DII National Championship tournament game from back in 2005, when the Rams prevailed over Liberty by a 4-3 score.

It was the first time competing at nationals for all but a handful of the Flames, with 20 members of their 25-man roster either freshmen or sophomores. But it was the third time in a row Liberty has lost in the first round of the DI tournament, after being ousted by the Naval Academy in 2014 and Ohio in 2015. 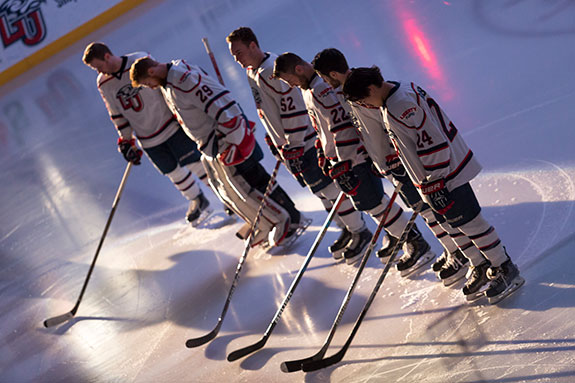