Lady Flames rise to fourth in Intercollegiate event at LaHaye 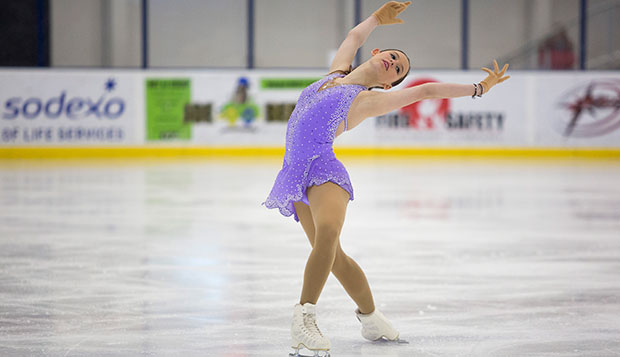 As host of this past weekend's Eastern Sectional Intercollegiate Competition, Liberty University's figure skating team placed fourth out of close to 20 colleges and universities represented in the three-day event held at the LaHaye Ice Center.

With 30 individual and team maneuvers starts, Lady Flames totaled 43.5 points to finish behind event champion Boston University (125.5), the University of Delaware (124), and Dartmouth University (88), which each had 35 starts. The fourth-place showing was an improvement on a sixth-place finish at the first sectional event at MIT.

Sophomore Senior-level skater Cami Burkhardt placed third out of four skaters in her dance routine on Saturday and third out of eight skaters in Sunday's long program after also competing in High Team Maneuvers.

Individually, freshman novice skater Jordan Robinson placed first out of 10 skaters in her long program on Sunday after finishing sixth out of 11 skaters in her short program.

Harter, who placed third in Saturday's Intermediate short program and fifth in Sunday's long program, will be one of four Liberty skaters to miss the March 17-19 University of Delaware sectional as she will be returning from a 10-day spring break trip to Rwanda with the School of Nursing.

Another Intermediate skater, sophomore Megan Gonzales — who placed third in Sunday's long program and competed on the low team maneuvers team that finished fourth on Saturday — will be attending a wedding that weekend.

"We had some injuries that prevented a couple of our skaters from performing (last weekend), including Chelsey Henry, who has a stress fracture in back but was still able to participate in High Team Maneuvers (with Robinson, freshman Emily Scherreik, and Burkhardt)," Lady Flames Head Coach Dawn Harter said.

Peterson, a Junior-level skater who wasn't able to compete her program after suffering a groin injury at MIT, finished fifth in Sunday's long program.

Senior Pre-Juvenile skaters Rebekah Hicks and Leah Cowan, who was nursing a foot injury and wearing a boot between events, both finished third out of eight skaters in their sections of Saturday's short program.

The top three teams in the Eastern Sectional standings after the last of three competitions at Delaware will qualify for U.S. Figure Skating Collegiate Nationals.

"Our goal is to skate strong at Delaware and maintain our fourth-place position," Harter said. "We know we have room to make it to the top three next season. We can taste it. It's right there."