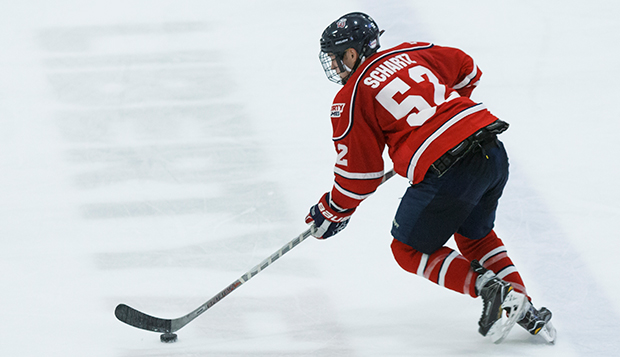 Liberty University's ACHA Division I men's hockey team, seeded second in its first Eastern States Collegiate Hockey League (ESCHL) tournament, defeated fifth-seeded West Chester for the fifth time this season in Friday's first round. The Flames fended off a third-period comeback bid by the Golden Rams to emerge with a 5-3 victory at the University of Rhode Island's Boss Arena.

"It definitely wasn't our best effort tonight, but it's a good opportunity to learn from this and get better tomorrow," Liberty Head Coach Kirk Handy said. "These playoff-type games are very unforgiving, but we were able to get through."

The Flames outshot West Chester 60-18 for the contest, but did not put the Golden Rams away until the final minute of play.

Following a scoreless first period in which Liberty (27-12) outshot the Rams (8-22-3) by a 17-3 count, the Flames finally got on the scoreboard in the opening 30 seconds of the second when freshman forward Josh Hamilton put away a rebound of shots by sophomore linemates Zak Hayes and Zechariah Roberts.

"The line of Roberts, Hayes, and Hamilton carried us tonight," Handy said. "They played really well."

Liberty then netted the first of its two power-play goals for the contest after going on a man advantage a minute and a half later. Sophomore defenseman Zane Schartz skated in from the corner and slipped a shot past West Chester goalie Michael Rice from close range.

Hayes then capitalized on an assist from Roberts on a two-on-one break to extend the Flames' lead to 3-0 before the Golden Rams cut the deficit to 3-1 with 7:06 remaining in the second period.

Early in the third period, Hayes netted his second goal of the game and ninth of the season on a deflection of a shot from the point by graduate defenseman Ben Hughes to push Liberty's advantage back to three goals.

West Chester chipped away at the lead, trimming it to 4-2 with 8:12 remaining in regulation and 4-3 with a goal right off the faceoff in the final three minutes before the Flames put the game away with their second power-play goal, by freshman forward Brock Thompson, with just over a minute to go.

Junior goalie Josh Halpenny made 15 saves to preserve the win for Liberty.

"Our penalty kill was excellent tonight," Handy said. "They had a strong night, so that was a positive, for sure. The goals they scored were kind of off scrambled plays, plays that we weren't very sharp on. Tomorrow's a new day and we're excited and ready to go."