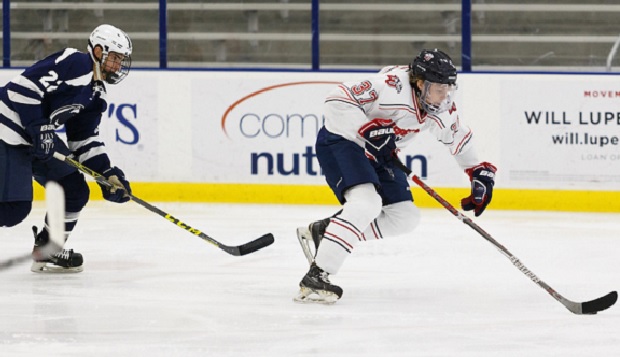 "It was a heckuva game, back and forth," Flames Head Coach Chris Lowes said, noting that the Ice Lions outshot Liberty, 44-39. "It was a good, tight game, with lots of chances on both sides. We're very happy we had this caliber of a game in the final. We knew it was going to be tough and it took 77 minutes of hockey to finish it. It was good to battle through that. Penn State has had more games like that than we have. If we have success at (ACHA DII) nationals, we can look back at this game and say that it helped us become a better team and deal with adversity."

Liberty (26-1-1) couldn't capitalize on its eight power-play opportunities in regulation and its first chance in overtime before finally cashing in with 29 seconds left on its 10th man advantage of the game. Blomberg earned Player of the Game honors with two scores against the Ice Lions, and was also named Tournament MVP after netting six goals in three games, including a hat trick in Saturday's South Division final, an 8-2 victory over UMBC.

"Victor moved up to play an important role on our top line," Lowes said of Blomberg, who filled in for injured graduate forward Danny Logan. "We had to kill a lot of five-on-three penalties and we couldn't really buy anything on our power plays until he scored on kind of a broken play in overtime."

At even strength, the Flames struck first with 11:09 left in the second period on Blomberg's first goal, set up by Ward as well senior forward Jordan Barstead. Liberty scored again just 26 seconds later when Ward converted off assists from junior forward Paul Lamoureux and Barstead for a 2-0 advantage.

Penn State (17-5-2) cut the deficit to 2-1 with just under seven minutes left in the second, after leading scorer Stefan Horgas stuck back a rebound of shots by top linemates Josh Singley and Abraham into an open net.

Then, with the Ice Lions on a four-on-three power play, Matt Wikman tied the contest at 2-2 with 12:04 left in regulation, finishing feeds from Francis Fourne and Horgas.

Flames sophomore goalie Jarrett Epp, who was named player of the game for Friday's 8-2 opening win over host Delaware, was named goalie of the tournament after allowing six goals in three games. He was up to the task late in the third period, repelling several quality shots on goal, and in overtime, when he stopped two breakaway opportunities by the Ice Lions.

"Penn State had one of the best goalies in the league and Jarrett matched or exceeded his performance," Lowes said.

Liberty had dominated Penn State, 9-1, in the first game of its three-day DII Showcase on Nov. 18 before suffering its only tie of the year against Davenport and only loss to Toledo in the second and third games. The Flames were a perfect 25-0 outside of that showcase and received one of two autobids to their fourth consecutive ACHA DII National Championships, March 15-19 in Columbus, Ohio, by finishing ranked second in the Southeast Region, behind only defending national champion Florida Gulf Coast.

Though Liberty is hosting next Friday's through Sunday's Southeast Region tournament at the LaHaye Ice Center, the Flames won't be competing in it. Only the third- through eighth-ranked teams will challenge for the last two national bids.