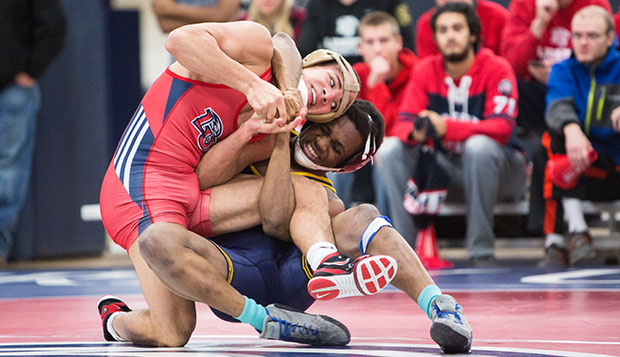 Flames freshman Andrew Burgette, who won his last bout by pin Saturday, wrestles during a home match on Dec. 10.

The Flames lost their first and third bouts before rebounding to win their second and fourth, capped by a 26-21 triumph over Nassau Community College to secure fifth place in the eight-team bracket.

Kutztown (Pa.) was the overall champion, defeating Ferrum College 27-12 in the championship match.

Liberty opened tournament action with a 21-19 setback to Camden (N.J.) Community College, the 11th-ranked team in the National Junior College Athletic Association. The Flames led 19-9 going into the 184-pound match but lost two decisions by one point and suffered an injury default in the final three bouts.

"We did have some tight battles," Liberty Head Coach Jesse Castro said. "That match was ours to win. It was within our grasp. There were two matches where we lost points that we could have won had we secured a few bonus points (for major decisions, technical falls, or pins)."

He said forfeiting the 125 pound weight class proved costly throughout the weekend.

"Giving up six points right off the bat at a tournament like this, that's hard to overcome," Castro said. "We still could have won that match, if we had picked up some bonus points along the way."

Junior 141-pound wrestler Tyler Sigler won four matches for the Flames, including two by fall and one major decision, while senior 174-pound captain Josh Ferenczy also finished 4-0 to lead Liberty, which defeated The Apprentice School 24-18 in its second match.

"Sigler had a tremendous weekend coming off an injury," Castro said. "He came back and wrestled at (the Citrus Invitational in) Florida, although he wasn't quite ready yet. He's almost back to full strength now."

"We wrestled hard against King, an NCAA Division II school," Castro said. "Robinson's match was tied with five seconds left and (Goforth's) foot slipped out at the whistle for an escape. That was a momentum turner after (Sigler) had just given us a momentum boost with pin at 141 pounds. Those kind of matches happen in the final second."

Ferenczy scored a 16-1 technical fall against Nassau's Dennis Feeney and Flames co-captain Taylor Westlake decisioned Jeremy Hughes at 184 pounds to help clinch the fifth-place bout. That expanded Liberty's lead to 26-15 and the Flames held Nassau to back-to-back decisions to close out the match.

"That was a solid win for us," Castro said. "We wrestled our backup heavyweight there (Thomas Bartholomew) and a backup 197 pounder (McIlhenny), who did a tremendous job against a really good kid," Nassau's Cedrick Stephens, who won 9-4.

Liberty will send a select squad to the Shipbuilders Invitational hosted by The Apprentice School next Saturday before hosting 26 college and university teams in the NCWA National Duals on Jan. 27-28 in the LaHaye Ice Center. The Flames will then travel to the Messiah Open on Feb. 4 and to Ferrum for a dual match on Feb. 8 before hosting the Mid-Atlantic Conference championships on Feb. 25.

"The National Duals is our first priority, from there on out, we'll be gearing up for the (MAC Championships) national qualifier," Castro said. "We'll be working on our conditioning more and polishing up some things for the postseason."