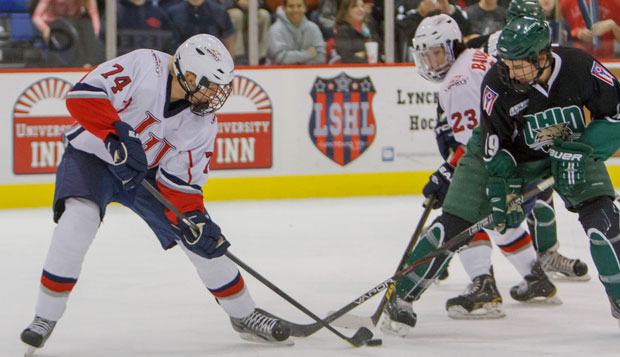 Cam Bakker scored on an assist from Rick Turner with 1:16 remaining in the third period to lift the Liberty Flames Division I men's hockey team to a 4-3 win over the top-ranked Ohio Bobcats Saturday night at the LaHaye Ice Center. The win snaps a six-game losing streak for the Flames and an 11-game winning streak for the Bobcats. Liberty comes away with a series split after dropping Friday night's game 3-2.

It was Ryley Egan who got the Flames started, taking a puck chipped ahead by Turner and ripping it past the glove of Ohio goalie Fedor Dushkin to give Liberty a 1-0 lead, their first lead since the Oklahoma game.

Liberty kept up the momentum as Steven Bellew scored his fifth of the year off an assist from Turner to put the Flames up 2-0 and ignite the home crowd.

The Bobcats were quick to respond as Michael Harris snuck one past Flames netminder Blair Bennett to cut the deficit in half, and one minute later, Diego Breckenridge tied the game on the breakaway. Turner put Liberty back up 30 seconds later, scoring his 22nd goal of the season.

Harris put a loose puck home for Ohio with 47 seconds to go and tied the game at 3 heading to the third.

Dushkin and Bennett worked hard in their respective nets to stave off a tie-breaking goal, including a huge save on a breakaway late in the third by Bennett. With little over a minute to go in the game, Bakker found the back of the net, which proved to be the difference in the matchup.

Bennett picked up the win for the Flames, making 32 saves to earn his fourth win of the season. Dushkin made 23 saves in the loss for Ohio.

Liberty returns to action at the LaHaye Ice Center Friday and Saturday Nov. 2 and 3 as the Stony Brook Seawolves come to town. Game time is set for 7 p.m.