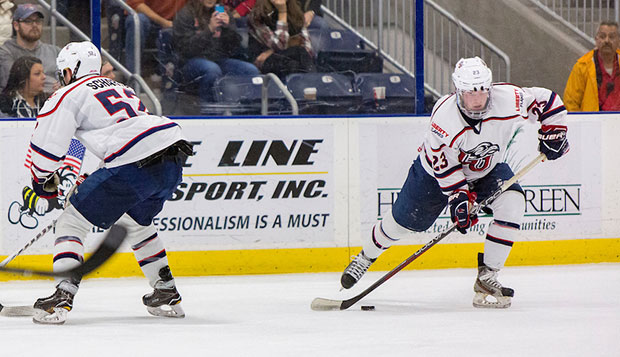 "We had a great talk with our team after the game," Flames Head Coach Kirk Handy said. "We need to learn from this — players, coaches, everyone is part of the solution. It's a great opportunity for our team to get better. Everybody needs to correct and refine the areas they need to refine and move our team forward to become better from this experience."

The Flames (14-7, 8-3 ESCHL) carried over their excellent play from the third period of Saturday's victory — that clinched a series sweep of West Chester — into the first period against the Scarlet Knights. After scoring the last two goals of its 4-2 win over the Golden Eagles, Liberty scored the first two within a span of a minute against Rutgers.

Sophomore defenseman Zane Schartz netted the first goal on a power play before senior forward Grant Garvin received the puck off a faceoff won by Flames freshman forward Quinn Ryan and one-timed his shot past Scarlet Knights goalie Christopher Marsillo for a 2-0 advantage with 6:30 left in the first period.

"The first period was probably the best period we've had all year," Handy said. "We did a lot of things well."

Liberty extended its lead to 3-0 three and a half minutes into the second period when sophomore defenseman Kyle Crane created a turnover behind Rutgers' cage and put the puck on goal, bouncing it off Marsillo's back and into the net.

That was all the scoring for the Flames, who outshot the Scarlet Knights 49-26 for the contest with senior goalie Matt Pinel making 21 saves, including a couple of the spectacular variety to first keep the Flames on top 3-0 before later repelling an odd-man rush to keep Liberty within striking distance.

Rutgers got one goal back with 3:45 left in the second before Liberty was whistled for back-to-back penalties and gave up a power-play goal with one second to go, closing the gap to 3-2 going into the third period.

The Scarlet Knights then scored the equalizer on the opening shift of the third period before taking their first lead with 16:13 remaining in regulation on their fourth goal in a span of less than eight minutes. The crushing blow came with five minutes to play with the Flames on the power play as Rutgers netted a shorthanded score to buy some insurance for Marsillo.

"The second period we had a late penalty we couldn't quite kill and that started to turn the game in their favor," Handy said. "They definitely got some more momentum on the first shift of the third period by scoring that goal that tied the game as we sat back on our heels."

Though the Flames still won two out of three games on their last road trip of the season, the lapse cost them a chance to close the gap on Delaware and Rhode Island in the ESCHL regular-season race.

"There's no excuse, the team just didn't get it done tonight," Handy said. "It falls on us as coaches and players. We're going to learn from this. It's an opportunity for our team to grow and mature. We've got 15 freshmen and by the end of this year, they're not freshmen any more, they're mature guys. We're going to use this as a starting point for our team to improve."

Liberty is traveling back to Lynchburg by bus overnight and will have five days to prepare for its last series of the fall semester against Indiana University of Pennsylvania, starting with Friday night's second "Midnight Mayhem" contest of the season at the LaHaye Ice Center.

"We're going to have to have a great week of practice and come out ready to play," Handy said. "It's all on us as a team to get better and continue to refine what we need to refine. We have to be better."