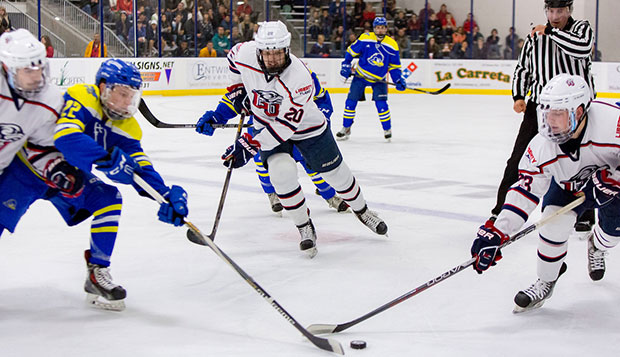 "There was a lot on the line and the whole game, right from their first goal, we started battling and it was a physical game," Liberty freshman forward Andy Clark said. "That's exactly how we play. Before this weekend, we had lost three of our last four games and the one that we did win was in a shootout. So we're glad we split the weekend and hopefully we can stay on top."

Delaware seized a 1-0 advantage just 28 seconds into the contest when senior forward John Redgate chased the puck behind the Flames cage and slipped but managed to shovel the puck to junior forward Dustin Mazzella in the right crease as he was falling down. Mazella slipped his point-blank shot off the right post past Liberty senior goalie Matt Pinel.

In a physical second period, the Flames capitalized on a breakaway goal by Clark to capture a 2-1 lead. Freshman forward Josh Bergen dug the puck out of the corner on the defensive end and flung it ahead to Clark, who showcased his speed by accelerating past the Blue Hens and into the open ice before beating Troiano on the shootout.

"Bouncing back from their first goal was huge and getting the momentum back in the second period was a game-changer," Clark said. "Bergen made an amazing play, popped it up right through their defense, so it was just bouncing and I just chipped at it, went in front and took off. It was kind of a risky play, but I just took off and made the fake and put it in the net."

The Flames struck quickly to extend their edge to 3-1 just over a minute into the third period on a power play when junior forward Grant Garvin received a feed from freshman forward Quinn Ryan in the left corner and sliced across the crease before wrapping the puck around Troiano into the right side of the cage.

But Delaware netted two goals in the span of 57 seconds to tie the game at 3-3, the first on a power play shot from the left circle off the stick of Max Freeman into the top right corner and the equalizer in four-on-four action on a wrist shot from in the slot by freshman forward Jakob DeFares with 14:56 to go.

With 6:46 remaining in regulation, Garvin, the Flames' leading scorer, netted his team-high fourth game-winning goal. He cleaned up the rebound in the left crease of shot from the high point off the stick of freshman defenseman Basil Reynolds, set up by a cross-ice assist from Schartz, lifting Liberty to a 4-3 edge

Three and a half minutes later, Flames freshman forward Jamie Crane received an outlet pass from Schartz along the left boards and was tripped up by Delaware forward Pierce Lamberton, released from the box after a penalty kill. Crane got back up on his skates and chased down the puck through the left circle before sending a crossing pass to freshman forward Josh Hamilton for a one-timed, open-net finish in the right side of the goalmouth, all but icing the victory with 3:13 remaining in regulation.

"That was a great play by Jamie Crane, who had an excellent game for us," Flames Head Coach Kirk Handy said. "Hamilton's worked hard. He deserves to score there."

Liberty outshot Delaware 42-37 and was whistled for 18 of the game's 30 penalties as the two teams combined for 70 minutes in the box.

"Both teams battled hard tonight," Handy said. "It was a real physical game. Guys like (freshman defenseman Matt) Cruickshank battled hard and (Basil) Reynolds and Zane (Schartz) played well for us. We're starting to see a lot of young guys step up and play well for us and that's encouraging."

Veterans came up big for the Flames, too, including Garvin and Pinel, who made 34 saves in net to keep the Blue Hens' offense in check.

Liberty hits the road to Michigan for the first game of its best-of-three Blue & Gray Cup series at Davenport on Thursday and two games at Oakland (Mich.) Friday and Saturday.

"Those are three big games before Thanksgiving," Handy said. "It'll be exciting to see how they go."