Davenport wins Blue and Gray Cup in shootout over Flames 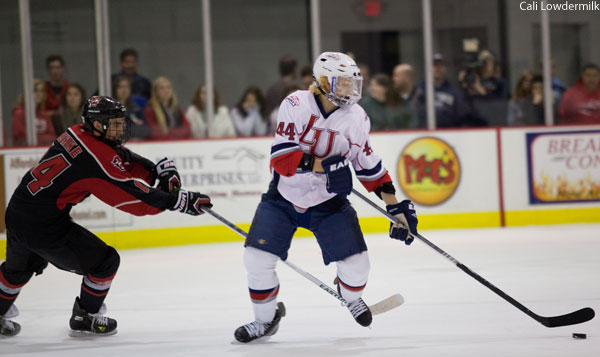 Davenport University claimed The Blue and Gray Cup after a road sweep of the Flames Division I men's hockey team, which was decided in a shootout Saturday night at the LaHaye Ice Center with the Panthers scoring the decisive goal in the third round, staking a 6-5 victory. Davenport beat Liberty 6-3 Friday night.

Liberty started the year 8-0 and has since lost five straight.

The Flames were on the board first as Rick Turner slapped in his 20th goal of the season on a rebound off an Andrew McCombe shot four minutes into the game. Dustin Wischmeyer responded for Davenport, beating Blair Bennett on a breakaway with six minutes to go in the first.

Panthers leading scorer Robert Kleinman put Davenport ahead three minutes into the second period and Stephen Flood increased the lead to 3-1 off a Mason Bohlinger assist. Bohlinger scored to put the Panthers up by three, giving the visitors a seemingly insurmountable lead. But Liberty fought back, thanks to a Luke Baumgarten goal on a loose puck with 36 seconds remaining in the second, giving the Flames some momentum heading into the intermission.

Liberty cut the margin down to one with five minutes left in the game as captain Andrew McCombe found the back of the net. Christian Garland knotted the score at four 30 seconds later off a pass from Ryan Kerr with 1 minute 40 seconds remaining in regulation.

Bohlinger notched his second goal of the night to give Davenport the lead again at 5-4, but the Flames pulled Bennett for a final minute offensive, which paid off when McCombe tied it up with just 12 ticks remaining on the clock.

The game moved into overtime where neither team was able to score the "golden goal" to cinch the victory, forcing a three round shootout to determine a winner.

Andrew Frank scored for Davenport in the first round while Liberty's Danny Logan equaled Frank's goal. Both teams missed in round two, Lindsay Leblanc for the Flames and Phil Wendecker for Davenport. Kleiman put the Panthers ahead in the third round, and Turner missed high, giving Davenport the game and the cup.

Matt Kaludis made 27 saves for the victors, while Blair Bennett took the loss for Liberty, despite making 31 saves.

The Blue and Gray Cup was instituted this year to celebrate both the rivalry of the two teams and the sesquicentennial of the Civil War, where units from Michigan and Virginia fought on the same battlefield. The cup will be competed for annually in a best-of-three format. Davenport staked its right to the cup after taking the first two against Liberty this year. The programs will meet again for a third game on Nov. 29, this time at Davenport.

Liberty will host No. 1 Ohio University next Friday and Saturday night at 7 p.m.