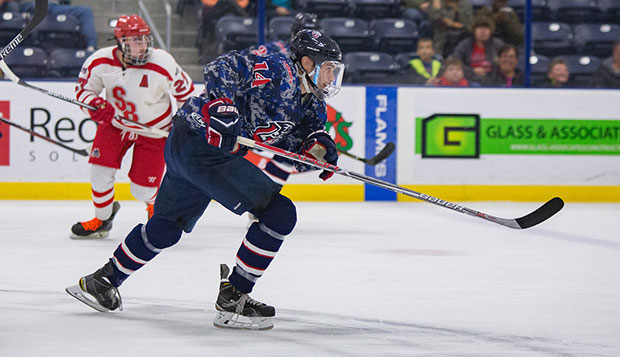 Back-and-forth battles between Liberty University's ACHA Division I men's hockey team and defending Eastern States Collegiate Hockey League (ESCHL) champion Stony Brook could be the norm as the teams wage a seven-month war for league supremacy this season, the Flames' first in the ESCHL.

"Our hope is to be there with the elite teams in the ESCHL and you're going to have games like this," Liberty Head Coach Kirk Handy said. "I felt like we had a slow start and that really hurt us. We didn't come ready to play at the start of the first period and that was a big negative for us tonight. Last night, we came out on top and we have to learn from what happened tonight and be better next game."

In honor of Military Appreciation Night Liberty brought out the color guard for the playing of the National Anthem and sported Liberty blue camouflage jerseys.

For the second straight night, Stony Brook struck first, with 5:52 left in the first period, when forward Joe Bochichio, stationed in the right crease, put away a putback of a shot from the high slot blocked by sophomore goalie Blake Scott, who made his second straight start between the pipes.

With 1:52 left in the period, freshman forward Basil Reymonds netted the equalizer by launching a shot from the right blue line that jetted through traffic into the upper netting, assisted by sophomore forward Marshal King.

However, after a penalty was assessed to freshman forward Josh Bergen on a solid check along the left boards, Stony Brook capitalized quickly to seize a 2-1 lead in the final 20 seconds of the first period.

Seawolves forward Matthew Crockett won a faceoff in Liberty's defensive zone before pouncing on the rebound of a shot from the left circle by defenseman Mike Cartwright and punching his second putback past Scott.

With 15:25 left in the second period, Scott saved a quality scoring chance from point-blank range. Just seconds later, defenseman Frank Sherding received a pass and fired a shot from the high slot that deflected off Scott's stick and in, stretching Stony Brook's advantage to 3-1.

Moments after taking a hard hit against the defensive boards, freshman defenseman Matt Cruickshank pulled the Flames back within 3-2 with 3:23 left in the second stanza after taking a short pass from King and faking a shot in front of a sliding Stony Brook defenseman near the high point. He skated around him before uncorking a shot from the top of the left circle that beat Stony Brook goalie Tyler Huberty.

The Flames came tantalizingly close to tying the contest moments later when freshman forward Andy Clarke sent a shot from the left circle that junior forward Grant Garvin redirected through Huberty. The puck slipped through the goal box before being cleared by a Seawolves defenseman.

Given the reprieve, Stony Brook reopened its two-goal advantage by capitalizing on a power play with just over a minute remaining in the period when Brendan Calello slid home the rebound of a shot from the top of the right circle that Scott blocked and stretched to clear out of the crease.

The Flames finally turned up the heat in the third period. Seconds after gaining a man advantage, sophomore defenseman Zane Schartz received a pass along the blue line from senior defenseman Ben Hughes and one-timed a slapshot past Huberty into the top right corner of the cage, trimming the deficit back to one goal with 15:46 remaining in regulation.

Once again, however, Stony Brook extended its lead to two goals when Calello dug the puck out along the back boards to Bochichio, who flicked a backhanded pass to fellow forward Christ Stemke cutting into the left crease for an easy finish and a 5-3 edge.

With 3:49 remaining in regulation, Liberty sophomore forward Colt Steele scored on a chip shot in the right crease off an assist from Garvin in the right corner, though Huberty appeared to block the puck near the right post. That drew the Flames back within 5-4 one night after Stony Brook had a potentially game-winning score disallowed by a whistle in the third period.

Stony Brook outshot Liberty by a 40-30 margin for the contest and Scott made 35 saves in his second setback.

"We want to put pucks on net and that didn't happen tonight," Handy said. "We just didn't execute the game plan tonight. We have to have an element of patient there, but we still have to have a good push. We are going to make some changes. The third period we were strong, when we had a physical presence in there. But the first two periods were so-so and you can't have a so-so period against these quality opponents. We're a young team and we've got to learn from these games and be better moving forward."

The Flames welcome Delaware, a team they are currently tied with atop the ESCHL, next Friday and Saturday at LaHaye, with the puck dropping at 7 p.m. both nights.

"Delaware's a huge series," Handy said. "We can expect the same out of Delaware that we saw out of Stony Brook tonight, quality opponents and we'll have to adjust. We'll have a great week of practice and be ready to go Friday night."