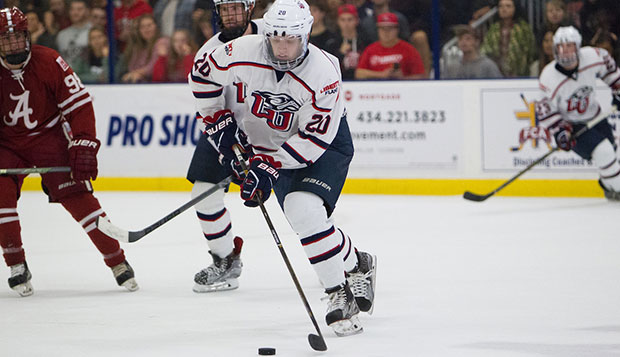 Just 12 hours after dropping a heartbreaker in front of a capacity crowd at the LaHaye Ice Center in its series opener against Alabama, Liberty University's ACHA Division I men's hockey team responded by overwhelming the Crimson Tide in Saturday afternoon's rematch, 11-2.

The difference between the two games was like night and day. After relying too much on individual effort in the 7-5 "Midnight Mayhem" setback, the Flames (4-1-1) got goals from 10 players in their best team performance of the season.

"When you play out of the system and kind of by yourself instead of as a unit, then it gets hard on your body," Liberty Assistant Coach Marc-André Bourdon. "But today, the guys were all close. They were supporting each other and playing very well as a unit, so it's not as tiring. The guys seem to have more energy tonight than last night, which was not normal because this was their second game in 15 hours. We can see the power of the system and unity in the system. There's only one way to win and that's by having everybody chip in."

The Flames built their attack from the defensive zone, where senior goalie Matt Pinel made 25 saves and Liberty limited Alabama's second chances while showcasing a more fluid and effective transition game.

"What was the most important thing today was playing in the defensive zone first, a full five-man game as a unit," Flames sophomore forward Zechariah Roberts said. "All four lines were going today and just about everyone got on the scoreboard. Scoring 11 today's a statement to the kind of offense we can have."

It was the third consecutive series split for Alabama (3-3), which upset No. 7 Oklahoma last weekend.

Moments after Alabama killed a power play midway through the first period, the Flames' returning brother duo of forwards Chase and Owen Harris worked in tandem give Liberty a 1-0 lead. Owen Harris fought off a defender to skate around the left circle before slipping Chase Harris a short pass out of the left corner that he fired past Crimson Tide goalie John Grenier.

Less than five minutes later, the Flames capitalized on a fast break sparked by sophomore forward Colt Steele, whose shot in the right crease was blocked by Grenier, as was freshman forward Josh Bergen's follow through traffic in front of the cage. Freshman forward Chayden Lauber controlled the loose puck and skated it behind the cage before dishing it back to Steele in the left crease, where he flung a well-placed wrist shot top shelf over the glove of Grenier, doubling Liberty's lead to 2-0.

The Flames applied relentless pressure over the next three minutes to try to push their lead to 3-0 before the break. Instead, Alabama withstood the storm and cut the deficit in half by taking advantage of a steal deep in the defensive end. Jeremy Hannah swiped the puck from Liberty sophomore forward Zak Hayes as he was transitioning out of the defensive zone and sent a short feed ahead to fellow forward Andrew Durkin, who juked around Pinel and deposited the puck inside the right post 43 seconds before the first intermission.

Liberty broke the contest wide open in the second period, outscoring the Crimson Tide 6-1, ignited by the game's only three power-play goals — the first on a five-on-three opportunity.

Liberty senior defenseman Ben Hughes started a tic-tac-toe pass sequence by dishing the puck to sophomore defenseman Zane Schartz in the left circle. He one-timed a cross-crease pass to Brock Thompson, who lifted a lunging shot into the upper netting, extending Liberty's lead to 3-1.

With less than a minute remaining on the second penalty, the Flames netted another goal 45 seconds later after Thompson won the ensuing faceoff. Freshman forward Garrett Nelson set up freshman defenseman Matt Cruickshank for a shot from the top of the right circle before sophomore forward Zechariah Roberts converted off the rebound, putting the Flames up 4-1.

That prompted Alabama to switch goalies, replacing Grenier with Chris Skeates. He couldn't stop the bleeding as Liberty killed one penalty and capitalized on another with 9:12 left in the second period when Nelson trapped a pass from Steele and launched a shot from the blue line through traffic inside the left post.

Hughes initiated the Flames' sixth score by uncorking a shot from the top of the right circle, batted down by sophomore defenseman Kyle Crane and stuck in by freshman forward Andy Clarke in the right crease.

Less than a minute later, Alabama's Griffin Butler responded with a putback of a loose puck in the left crease and Dylan Teed had his one-on-one from right in front stuffed by Pinel before Owen Harris scored on a counterattack, finishing fast-break assists from Hayes and Chase Harris. Schartz capped the second-period scoring with a shot from the high slot set up by senior forward Grant Garvin.

Just over five minutes into the final period, Schartz chased down a lead pass from Cruickshank along the left boards and sent a perfect pass across the crease to Thompson who snuck the puck past Skeates to stretch Liberty's lead to 9-2.

Less than a minute later, Garvin put away a fast-break feed from freshman forward Quinn Ryan with a one-timed shot into an open right side of the net. In the closing minutes, Liberty tacked on one more score as Nelson dished a pass from the high point to Hayes in the high slot, where he unleashed a quick wrist shot past Skeates into the upper netting.

Liberty has next weekend off for fall break before traveling to Eastern States Collegiate Hockey League (ESCHL) rival Rhode Island on Oct. 14-15. The Flames (4-1-0) open an eight-game homestand over Homecoming Weekend, Oct. 21-22 against Niagara, with both games set for 7 p.m. at the LaHaye Ice Center.