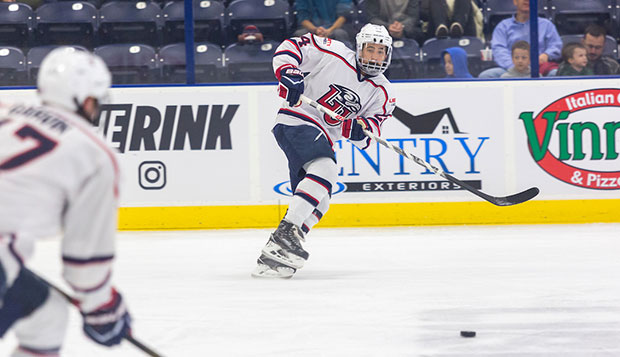 After peppering West Chester goalie Mike Rice with 62 shots in a 5-2 come-from-behind victory, the Flames (3-0, 2-0 ESCHL) again applied the majority of the pressure. They outshot the Golden Rams (0-2, 0-2) 48-17, converting a higher percentage of their shots on Brendan Colgan, who was making his debut in net, and opening leads of 3-0 after the first period and 6-2 after the second.

"It was similar to last night in that we were able to generate a lot of shots on net," Liberty Head Coach Kirk Handy said. "We just had to be patient and wait for our opportunities."

Freshman forward Quinn Ryan started and ended the scoring with power-play goals, completing a hat trick for his first three points in a Liberty uniform, and senior forward Grant Garvin scored one goal and distributed four assists to pace the attack.

"Quinn Ryan had his best game for us and there seems to be some chemistry with Garvin and (sophomore forward Zechariah) Roberts," Handy said. "He's a guy who we were on a little bit to shoot the puck more this week in practice and he responded."

Less than five minutes after the opening faceoff, Ryan netted the first goal top-shelf on an open wrist shot set up by senior defenseman Ben Hughes and Garvin in the left circle.

"He gave me glove-side so I shot high and it went in," Ryan said. "Garvin made a good screen in front. He's a great player and he makes good passes. I was just fortunate to get them to go into the net."

Less than two minutes later, sophomore forward Owen Harris posted up in front of the right post and finished feeds from sophomore defenseman Zane Schartz and senior forward Chase Harris, who was playing in his first game after an injury.

With just under three minutes left in the first, Garvin levied a heavy check in the corner before starting a fast break from the defensive end and extending Liberty's lead to 3-0 with a one-timed shot in the right slot off a perfectly-timed pass from Roberts.

The Flames added three more scores in the second period, sparked by Ryan's deflection of a backhanded shot by Roberts off a fast-break assist from Garvin with 15 minutes remaining.

Just over a minute later, West Chester got on the scoreboard on a power play putback by defenseman Bill Swahl in the left crease. But Liberty responded quickly on a slapshot from the right side of the blue line by freshman defenseman Matt Cruickshank off an assist from freshman forward Josh Hamilton.

The Golden Rams capitalized on another five-on-three man advantage to draw within 5-2 before Schartz found the five-hole on a close-ranged shot up from out front, assisted by Liberty goalie Blake Scott and Garvin.

Finally in the third period, freshman defenseman Chayden Lauber netted the first goal of his career, finishing assists from Hamilton and sophomore defenseman Kyle Crane with a shot from the left circle, before Ryan put the win on ice and capped his hat trick by tucking the puck around Colgan on another power play opportunity, capitalizing on assists from Schartz and Garvin, his fourth of the game.

It was the second game in a row that the Flames got three goals from defensemen after freshman forward Garrett Nelson lifted Liberty to a 3-2 lead with a hat trick of his own.

Liberty returns to the LaHaye Ice Center next Friday for the first of two "Midnight Mayhem" games of the semester against Alabama followed by a Saturday afternoon rematch at 3 p.m.