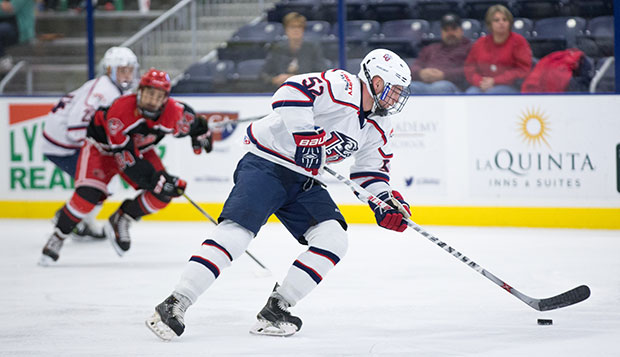 Liberty defenseman Zane Schartz made an immediate impact during his freshman season, scoring the Flames first goal in the renovated LaHaye Ice Center.

He follows last season's selection Luke Hannon, fellow forward Robert Ward, a rising senior who made the team in 2013-14, and defenseman Steven Bellew, who graduated last weekend, in 2012-13.

Schartz grew up in Dallas, Texas, but his family moved to Kansas last year. He played two years of Junior "A" hockey in the British Columbia Hockey League (BCHL) before joining the Flames last fall and finishing tied with Danny Logan for third on the team in scoring with 28 points (7 goals, 21 assists), just one point behind Ward (6G, 23A).

"It was a pretty smooth transition," Schartz said. "The BCHL is a really good league and a really fast and skilled league and the ACHA is pretty similar to that."

It was an up-and-down season for the Flames (13-18-1), who did not advance to the 20-team ACHA DI National Championships for only the second time in the 10 years it has competed at that level.

"After the hard year we had, the personal success is always good, but I would have much rather had the team success," said Schartz, an offensive-minded defenseman who contributed on the power play by putting pucks on net from the blue line. "I'd give away all the personal accolades to have seen the team make the playoffs. Hopefully, I can build off this rookie year onto the next three years and keep getting better and improving to help the team as much as possible."

Schartz has a couple exciting opportunities on tap this summer, to improve both his hockey game and his career prospects. He has lined up a four-week internship with a commercial real estate group in Dallas and will also travel to Detroit to train for five to six weeks with 20-25 professional and collegiate players under the watch of Kim Muir, a high-level figure skater growing up who now serves as skating coach for both the Detroit Red Wings and Carolina Hurricanes.

"There will be good competition that will be able to push me," said Schartz, who previously worked with Muir when he played for a Midget Major AAA U18 team based in Detroit. "She definitely made a huge impact on my skating and pushed my game to the next level. I owe a lot of my success on the ice to her. Skating's one of my strong suits and the more I work at it, the farther I can go in hockey and the more I can help the team."

He believes Liberty has tremendous potential on tap for next season, with a balanced mix of returning veterans and incoming recruits.

"We have a good corps of returning guys coming back with (senior forwards) Chase Harris and Grant Garvin and (junior head captain) Ben Hughes," Schartz said. "The new group is going to have some good skill guys and character guys and I'm really excited for next season. (Head Coach) Kirk (Handy) and (Associate Head Coach) Jeff (Boettger) really believe in the guys and I'm excited to help lead the team next season. Hopefully, me and Ben and Kyle (Crane) can take the first-year guys under our wings and (Assistant Coach) Marc-André Bourdon will teach us everything we need to know. The more successful the freshmen are, the more successful we'll be as a team."