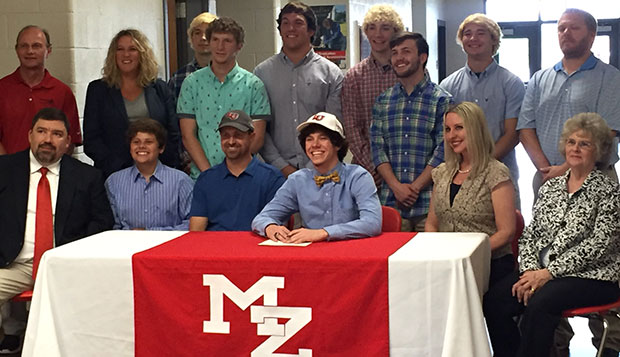 Incoming Liberty University recruit Ashton Robinson, a 126-pound senior wrestler at Mt. Zion (Ga.) High School, may be small in stature, but he has great ambition and motivation to succeed — and to see his teammates do the same.

Robinson placed in the top three of the Georgia state championships all four years at Mt. Zion, a Class A public school located west of Atlanta near the Alabama border.

He captured the 106-pound state crown as a freshman before placing third as a sophomore at 120 pounds, finishing as state runner-up as a junior at 126 pounds, and third this past season, again at 126, earning the team's Captain's Award for leadership.

"We got second in the state as a team the last two years," said Robinson, who accumulated a record of 161-24 over the past four seasons and declined offers to continue his wrestling career at NCAA Division I Campbell University and elsewhere. "I wanted to be somewhere I'd be happy for four years."

"Coach Castro's a really good guy," Robinson said. "I've talked to him and he has a nice personality that grows on you."

His goal as a freshman for the Flames next winter is to be an all-American with a top-eight showing at the NCWA National Championships at either 125 or 133 pounds, and to help Liberty reclaim its NCWA National Duals and tournament titles won in 2014-15.

Robinson said wrestling is an individual as well as a team sport, especially in dual meet competition.

"You've got to make sure you get the win and do your part," he said. "I'm going to try to set the tempo, be the hardest-working one (in the wrestling room). If you see someone slacking off, you've got to push them or they're not going to get any better."

Robinson hopes to rub off on his teammates in positive ways, sharpening their technical skills and exhorting them as brothers in Christ, while allowing them to challenge him to grow physically and spiritually as well.

He is not only a gifted wrestler, but also an excellent student, maintaining a perfect 4.0 grade-point average for his senior year at Mt. Zion and a 3.6 cumulative GPA.

Hi favorite subject is history, but he plans to study political science at Liberty and to go on to law school after graduation.

"I want to go into court law, to start up a law firm, and possibly go into politics after establishing that and earning enough wealth," Robinson said.

For the immediate future, he is focused on training for his freshman season with the Flames this summer.

"Right now, I'm working out a lot and trying to pack on a lot of weight, and getting back on the mat," Robinson said.