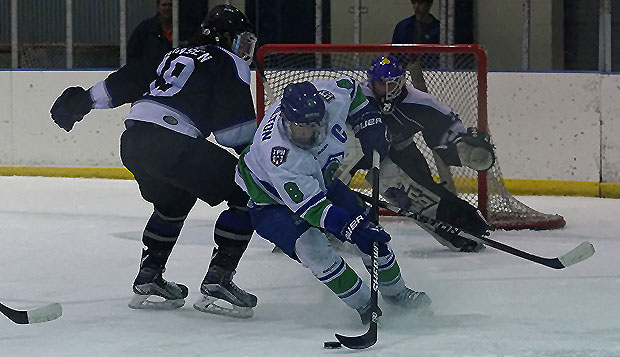 Josh Hamilton ranked among the leading scorers in the NA3HL's South Division last season with the Point Mallard (Ala.) Ducks.

Growing up in North Carolina, Josh Hamilton was a teammate of Liberty University ACHA Division I men's hockey freshman forward Owen Harris on the Greensboro Stars U16 squad that won a national championship in 2013.

"Owen Harris and I grew up playing together and we were playing on the same line when we won the championship so hopefully that carries over," Hamilton said. "I know how he plays and he knows how I play."

Hamilton, who committed last week to play for the Flames next fall, hopes to help lead Liberty back to the ACHA DI National Championships in 2016-17.

He is coming off an excellent season with the Point Mallard Ducks in Decatur, Ala., netting 40 goals and distributing 34 assists in 53 games including regular-season competition and playoffs for the North American 3 Hockey League (NA3HL) South Division champions as well as Silver Cup Tournament play.

"We are excited to add Josh to our family at Liberty," Flames Head Coach Kirk Handy said. "We love the leadership he possesses and the way he competes on the ice. We know he will fit well into the culture of our hockey program."

A diminutive right wing at 5-foot-9, 140 pounds, Hamilton, 19, is an elusive scorer who is sneaky quick.

"I use my small body and speed to my advantage," he said. "That's my key thing, what I've got going for me and what I use the most. We're going to have a pretty fast team."

Hamilton, who was unable to attend Liberty's Hockey Recruitment Camp earlier this month because his team was still competing in the playoffs, received the NA3HL South Division Leadership Award.

"Josh was our undisputed leader, he did a tremendous job setting the example and tempo for our team," said Tom Winkler, head coach and general manager of the Mallard Ducks.

"My parents taught me how to be a leader and to be a good guy to be around both on and off the ice," added Hamilton, who has worked in the warehouse of his father's furniture distribution company for the past five years.

During a campus visit two weekends ago, Hamilton met with junior forward Chase Harris, Owen's older brother, and sophomore defenseman Ben Hughes, who have been designated as two of the Flames' team captains for next season, and took a tour of the renovated LaHaye Ice Center. He looks forward to forming relationships with his teammates at Liberty, where his older brother, Jacen, will graduate in May before pursuing his master's degree residentially.

He enjoyed his tour of the ice rink, which he called "unbelievable," but was equally impressed with the rest of Liberty's campus.

"I've always really wanted to go to there and always liked the Christian aspect of the university," said Hamilton, who attended a couple summer youth hockey camps at Liberty. "For me, that's a big part of my life. The campus is just a bonus. I probably would have gone there even if I didn't play hockey, but it's definitely been one of my biggest goals to play hockey for (the Flames)."

He realizes he has his work cut out for him to earn playing time as an incoming freshman.

"I know it's going to be really hard to get into the lineup," said Hamilton, who plans to spend his summer eating and working out in the gym as well as in the warehouse. "I've got to be there every day and put in 110 percent (at practice and in games)."

He plans to declare a major, possibly sport management, in a field of study that will enable him to stay in the sports industry.