Flames fight to finish at tae kwon do national championships 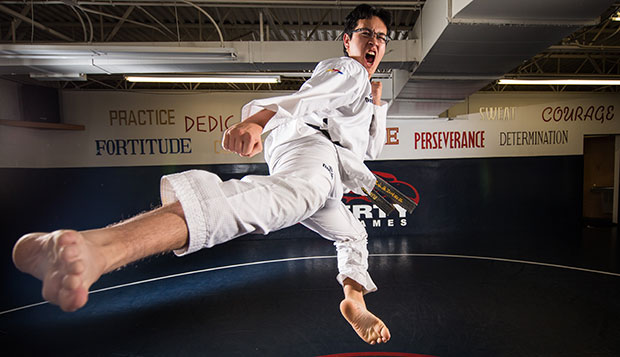 Four of the 10 members of Liberty University's tae kwon do team who traveled to Boulder, Colo., for this weekend's National Collegiate Taekwondo Association (NCTA) Championships will return with a medal on Monday with top-three performances in their respective belt and weight classes.

"The medal count wasn't what we had hoped, we ended up with three bronze and a silver, but I think we learned a lot," Liberty Head Coach Tom Childress said. "I was thrilled with all of them. Everyone did an outstanding job. They represented well, not only in their fighting, but in sportsmanship. These guys and girls were absolutely great, and always make Liberty proud by the way they act."

Sophomore Moriah Martin earned the silver medal in the women's welterweight black belt division, losing her final bout by two points to an opponent much taller than her.

"Moriah did really well and barely lost in the final," Childress said. "Unfortunately, in this sport height matters a whole lot."

Tykeyah Henderson, who captured a gold medal in the heavyweight yellow belt division last year, was disqualified from her heavyweight green belt competition due to junior safety rules in effect for the tournament after she knocked her opponent out with a kick to the head.

"She would have challenged for the gold medal if she hadn't been DQ'd," Childress said.

It was the third-highest attended collegiate nationals ever with trials for the U.S. National Team scheduled next week, also in Colorado.

"There were a lot of people at the tournament who will be competing for Team USA," Childress said.

He said Liberty had one of the smallest teams at nationals with 10 competitors, noting Army and Brown brought over 30 athletes and UC-Berkeley, UC-Davis, UCLA, Duke, MIT, and Princeton had nearly that many.

"If we had won 10 gold medals, we wouldn't have won a team award," Childress said.

He said altitude affected many of Liberty's competitors with the University of Colorado being more than a mile high at 5,430 feet.

"That really got to us, especially in the last rounds, after making it through the field of eight," Childress said. "Every one of our fights went to the third round and most of those we lost were really, really close."