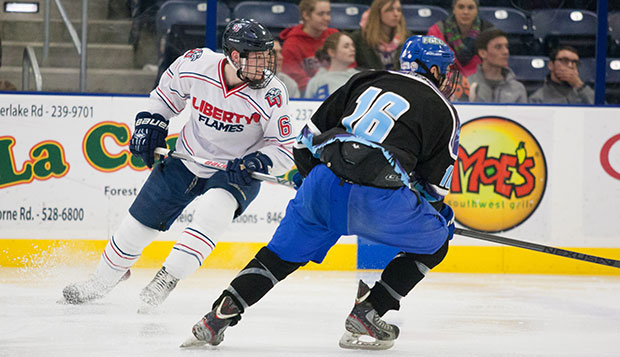 The Eagles (30-5), who lost three of four regular-season meetings with the Flames (30-4), were playing in their fourth DII title game in the past five years. The Flames won back-to-back overtime games to advance to their first championship final since 2006, when they lost to Oakland (Mich.) in OT.

"It was our year to feel the pain of getting that close and having it slip through our fingers," Liberty Head Coach Chris Lowes said. "Our guys accomplished a lot. It was a special group and I'm proud of the way we finished the year."

FGCU, which outscored opponents by a 290-60 margin this season, including 33-8 at nationals, scored late in the first period and in the final 15 seconds of the second to take a 2-1 lead into the third. Sophomore forward Jordan Klotz assisted senior forward Dillon Duprey on the first, when Duprey took the puck off the back left boards and worked around a pick on a Flames defender before slipping it through the five hole of Liberty graduate goalie Blair Bennett with 2:35 to go.

"Tons of credit to Florida Gulf Coast," Lowes said. "They're a highly skilled and well coached team. They're the most dangerous offensive team here. Our goal was to have them in a tight battle and it was a close game the whole way. We were pretty evenly matched five-on-five, but a lot of times special teams can make or break you in games like this."

Liberty (30-4) ended the first period and started the second on a power play, but couldn't capitalize as the Eagles actually had the better chances, including a shorthanded breakaway by senior forward Dan Echeverri, the tournament MVP, and a shot by Duprey from the top of the circle, saved by Bennett (32 saves).

FGCU, which outshot the Flames 36-31, nearly extended its lead to 2-0 five minutes into the second when junior forward Mark Arnine pulled the puck off the right endline and tucked his shot around Bennett. However, the goal was disallowed as the cage came off its moorings a split second earlier.

Given the reprieve, Liberty netted the tying goal in the final 30 seconds of their fourth power play of the contest. After letting a five-on-three advantage expire, with FGCU senior goalie Mike Reed (30 saves) saving a series of close-ranged shots, Devon Docksteader, working five-on-four, stopped a short pass with his skate before sending the puck back to fellow junior forward Ben Freymond in the right circle. Freymond's wrist shot deflected over the shoulder of Reed into the top right corner of the net with 11:30 left in the second, ending a 0-for-20 drought for the Flames on the power play in the tournament.

Liberty nearly seized a 2-1 lead in four-on-four action moments later when Freymond made a stop and diving outlet pass to senior forward Peter Kazmierczak, whose contested shot in the left crease glanced off Reed's glove and barely missed trickling in behind him.

In the final 15 seconds of the third period, FGCU graduate forward Nick Houser won a faceoff in the right circle to sophomore forward Mike Chemello, who fed the puck into Echeverri in the slot before making a diving stab at the follow of a shot by Houser, blocked by Bennett. While falling down in the right crease, Chemello barely slid the game-winner between Bennett's skate and the right post.

"The goal at the end of the second period was such a big momentum change and was the key to our last two victories," FGCU Head Coach Bob Brinkworth said, noting that the Eagles also scored late in the second period of Monday's 5-2 semifinal win over Grand Valley State. "(The Flames) had so much energy in that first period. But there's three periods in a hockey game and when you get behind a goal or two in a national tournament game in the third period, you don't have the energy that you had five days ago."

Lowes shortened his bench and played only three lines of forwards, but said fatigue wasn't a factor.

"I was happy with the way the guys played for 60 minutes today," he said. "Our conditioning was at a high level and our guys left it all out there, knowing they didn't have to save it for another day. There were five or six times (in the third) where I thought we were getting the equalizer, but we couldn't buy that last goal."

With just over 8 minutes remaining in regulation, Arnine won a faceoff in the Flames' left circle to Duprey who sneaked a quick shot through a screen in front of the cage, beating Bennett to the near post for a 3-1 edge. Liberty was awarded its final power play a minute and a half later, but couldn't generate any scoring threats and the Flames pulled Bennett for the final minute of four-on-four play when Echeverry iced his team's second national title in five years with an empty-netter.