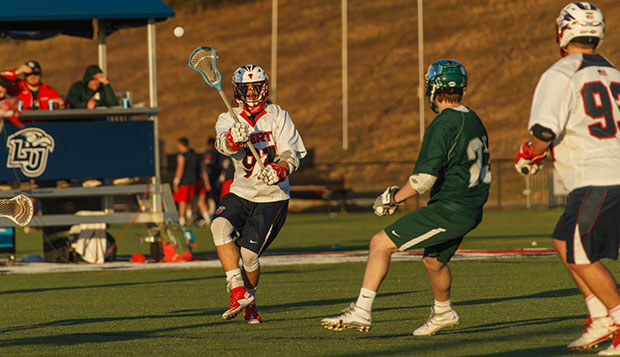 Liberty senior Bryce Mrakovich passes the ball against Michigan State, in a 13-6 win March 9 at the Liberty Lacrosse Field.

For the second time in three games on its spring break trip, Liberty University's men's lacrosse team held an opponent to one goal in the first half — this time en route to an even more decisive 12-4 triumph over South Florida — Friday night at Florida State University in Tallahassee, Fla.

Playing in a steady rain, the 16th-ranked Flames (5-3) opened a 9-1 halftime advantage on the unranked Bulls (1-6) before the two teams played to a 3-3 draw in the second half.

"Overall, it was a great way to end our spring break," Liberty Head Coach Kyle McQuillan said. "There was not a quarter when it wasn't raining on us, but the focus of the day was to finish with another win — to keep us above .500 for the season and bring us above .500 for the trip — and to showcase some of our guys who don't often get as many chances to shine."

USF scored the first goal in the first half and the first two in the second before allowing the Flames to net nine goals in a row before halftime and three more spanning the third and fourth quarters.

"They scored first, which kind of surprised us, but we were able to respond with nine unanswered," McQuillan said.

"It was good to see we were spreading it out to players like Brett Wood and Chase Wright, who have been involved in clears (on transition)," McQuillan said. "Giving them the opportunity to score was great."

Gregory (4A), Miller (3A), Bernardo (2A), and Mrakovich (1A) were also generous in setting up teammates' scores, especially in the early-going when Mrakovich assisted Gregory's tying goal before Miller gave Liberty a 2-1 lead it would not relinquish. Miller then fed Gregory for his second score before Gregory quickly reciprocated by assisting Miller for a 4-1 advantage at the end of the first quarter.

The Flames platooned freshman goalies Matt Nichols in first half (five saves) and Brayden Harriman in the second (three saves).

Liberty ends its three-game spring break road trip with wins over No. 20 North Texas (9-6 on Tuesday) and USF after coming up just short of a sweep with Thursday night's 17-16 loss to host FSU.

The Flames return home this weekend, but they aren't finished with Florida just yet. They have two weeks to prepare for their next game, a "Midnight Mayhem" matchup with the University of Florida, set for 11:59 p.m. on April 1.

"We originally had Georgia Tech slotted for that, but decided to travel to play (the Yellow Jackets) on opening weekend in Atlanta so Florida jumped at the opportunity to take their place in the midnight game," McQuillan said. "We're expecting a good matchup."