Late penalties douse Flames in narrow loss to No. 12 Eagles 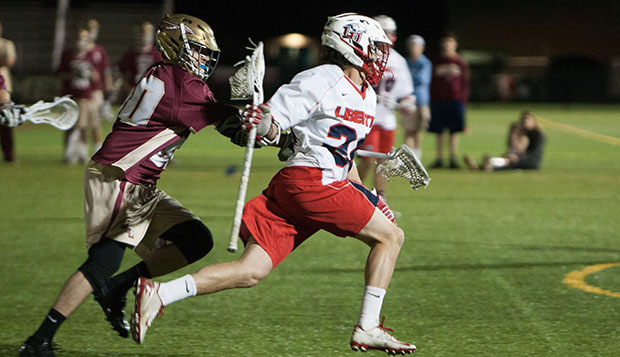 Down a goal with 1 minute, 15 seconds to go in Saturday afternoon's season-opener against Boston College in Atlanta, Liberty University's men's lacrosse team was called for two slashing penalties, putting the Eagles on a two-man advantage that all but sealed the Flames' fate, a 12-11 defeat.

"It was a close battle," said Liberty Head Coach Kyle McQuillan, whose team was ranked 16th in the MCLA Preseason Poll. "We came in with pretty high expectations and felt we would get the victory today. Unfortunately, came up a little short. We put ourselves in a pretty bad position with the two slashing penalties, which robbed us of a chance to put on a press or force a turnover to tie it up in the last minute."

The game was about as evenly contested as possible, tied at 2-2 after the first quarter and 9-9 at the end of the third. The 12th-ranked Eagles (1-1), coming off a lopsided loss to sixth-ranked host Georgia Tech on Friday, led 6-5 after the third quarter, and there were three or four lead changes throughout.

"We underestimated Boston College after it had a tough time against Georgia Tech, losing 18-5," McQuillan said. "Everybody probably started looking ahead to Georgia Tech more than they needed to and were not ready for Boston College's best game."

The Flames (0-1) definitely did not play their best game.

"We made a lot of mistakes, from turning the ball over to making bad passes, not having a lot of success on the ground balls or tracking their players on transition to getting called for penalties which gave them a lot of opportunities to score in man-up situations," McQuillan said. "Give a lot of credit to Boston College, which was able to capitalize on almost every single one of our mistakes. But it's frustrating as a coach. If you play and lose to a better team and play your best game, that's a lot easier to swallow."

Liberty senior midfielder Charles Fianko won 50 percent of his faceoffs (11 out of 22) and freshman goalie Matt Nichols saved 50 percent of the Eagles' shots on goal (12 out of 24).

"We really need to be winning those categories to gain some separation on teams," McQuillan said. "We like to try to see our goalies above 60 percent (on saves). Matt made a couple big saves at key moments to keep us in there. Overall, a good first showing for him.

"We didn't do terrible in any phase, but there's a lot of room for everybody to grow and get better," he added. "In close games, against tough competition, little things can make a difference, one faceoff won, one turnover or ground ball. We missed too many ground ball pickups which kept us from moving it up the field and getting scoring opportunities."

Offensively, the Flames got three goals and an assist from senior attack Ryan Miller and two goals each from freshman attack Sam Gregory and senior middies Bryce Mrakovich and Brett Bernardo, who added one, two, and three assists, respectively. Sophomore attack Nick Lombardozzi and senior middie Chad Moore both scored one goal.

Liberty will look to maintain its balanced production in Sunday's showdown with Georgia Tech, which boasts a stout defense.

"We have an opportunity to see how this team responds against a very good Georgia Tech team," McQuillan said. "When we get knocked down, we'll see whether we're going to get back up and how we're going to respond when we do get back up."

The rematch of last seasons SouthEastern Lacrosse Conference Division I tournament semifinal, won by the Yellow Jackets, 9-7, will be streamed live on Georgia Tech's website.