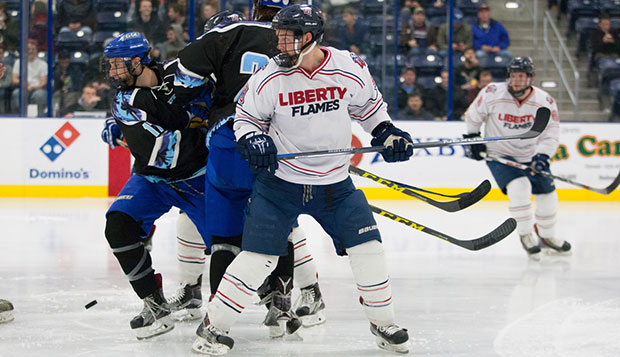 Graduate forward Christian Garland — who had netted the equalizer less than three minutes earlier falling down in front after receiving a feed from sophomore forward Tim Bierema — threaded a behind-the-back assist from behind the Eagles' cage to Bierema for the finish from deep in the left crease with 10:01 remaining in regulation.

"Ben Freymond made a great play to cycle the puck down low behind the net and I looked over my shoulder and Tim was standing there in the perfect spot right in the crease," Garland said. "I just knew I had to get the puck to him and I just kind of threw it there in desperation, and he put it in, no mistake, so it was great."

Bierema suffered a lower-body injury early in the game but chose to play through it and came through in the clutch for the Flames.

"Tim was a big impact player for us," Liberty Assistant Coach Mike Morrison said. "That's just the kind of guys we have on the ice. They want to leave it all on the line and make sure they're giving everything they can for the team."

After splitting the past three series against the Eagles, the Flames (23-2), ranked first in the Southeast Region, completed the program's first-ever sweep of FGCU. On Nov. 13-14 in Estero, Fla., Liberty upset the Eagles 3-1 in the opener before losing the rematch, 7-0.

"That was definitely in the back of our minds all weekend and they didn't really let us forget about it," Garland said. "But we proved that we were the better team out there. We put 120 solid minutes together as a team this weekend. Great goaltending, great defense, willingness of guys to block shots, discipline. It was a great team effort and that's a huge confidence builder to move forward."

FCCU (23-5) is ranked third and battling with the Flames and second-ranked Miami of Ohio for the two autobids into the ACHA DII National Championships. Liberty has three games at Maryland and UMBC next weekend and the Mid-Atlantic Collegiate Hockey playoffs to follow before the final ranking.

For the second straight contest, Liberty had to overcome a one-goal deficit, this time twice. Jordan Klotz put the Eagles on top less than four minutes after the opening faceoff, netting his 39th goal of the season, before junior defenseman Daniel Huntington knotted the score with five and a half minutes left in the first, deflecting in a slap shot from the top of the left circle from sophomore defenseman Sean Bakker off a secondary assist from senior forward and head captain Paul Ingles.

In the final minute of the first, with Liberty's second power play slipping away, Flames defenseman Ryan Sidun received a pass from graduate forward Ryan Kerr and launced a slap shot from near the center of the blue line, which junior forward Jordan Barstead deflected past FGCU goalie Mike Reed for a 2-1 lead.

Seven minutes into the second period. Eagles forward Nick Houser netted his 30th goal of the season after stealing the puck in the Flames' defensive zone and firing it past graduate goalie Blair Bennett. Freymond answered for Liberty in the final minute of the period with his 22nd goal of the year, putting away a feed from fellow junior forward Devon Docksteader.

The Eagles struck back once more, tying the game at 3-3 on Klotz's power-play goal assisted by Echeverri just over a minute into the third period before Echeverri cut into the crease and capitalized on a counterattack off a short pass from Klotz for a 4-3 advantage with 17:07 to go, setting up the Flames' dramatic comeback.

"Tonight, we made sure we were sticking to our systems," Morrison said. "The guys were playing hard. Last night, we came out a little too crazy and tonight, we were calm and collected."

In Friday night's opener, played before a rowdy season-record crowd, Liberty trailed 1-0 after Houser slid the puck past Bennett from the left crease off an assist from Dan Echeverri with 11:37 left in the first period.

Four and a half minutes later, Freymond pocketed a backhanded shot in the right crease off a point-blank assist from Docksteader before Garland converted a putback of a shot from the point off the stick of Huntington, lifting the Flames to a 2-1 lead.

FGCU responded to tie it with 3:25 left in the period on Colton Bailey's power play goal in the left crease and the score remained deadlocked at 2-2 until the final two minutes of the second when Sidun scored on a putback in the left crease of Docksteader's shot from the high slot that bounced off the boards behind the net. Freshman forward Sam Hisey capped the scoring in the third, putting away a wraparound assist from Huntington, who followed his own shot behind the Eagles net with 6:35 to go.