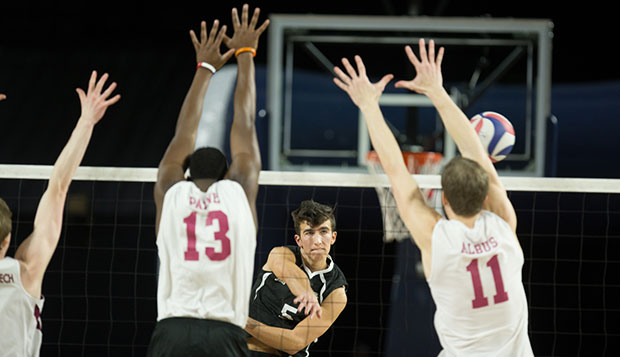 Billed as a showdown between the top two Division I South teams in the Eastern Intercollegiate Volleyball Association (EIVA), Friday night's season-opening "Midnight Mayhem" match in the Vines Center between Liberty University's men's volleyball team and visiting Virginia Tech turned into a show of strength for the Hokies soon after the stroke of midnight.

Virginia Tech, ranked as high as No. 1 in the nation last season before ending the year at No. 5, returned a few of its biggest hitters from last spring and torched the Flames, 25-12, 25-11, 25-19 before a crowd of more than 4,000 on hand for the late-night-approved event.

"It was not a good night for the team," Liberty Head Coach Bryan Rigg said. "We were mentally prepared (but) we lost momentum and we made a ton of mental errors which translated into physical errors. We had guys who were missing four or five serves in a row. We had passers who never miss a pass and they were struggling to even get to the ball. It was just uncharacteristic of us tonight."

Instead of rallying behind their home fans, the Flames struggled to find their offensive rhythm and played defensive volleyball for much of the match.

When they met the Hokies in their fall season-opening Liberty Invitational on Oct. 24 in the LaHaye Multipurpose Center, the Flames lost the best-of-five championship match by 25-23, 25-27, 25-22, 25-22 scores. But while Liberty returned the same lineup for Saturday morning's rematch, Virginia Tech brought back 6-foot-6-inch middle blocker Nick Allen and 6-4 outside hitter Dan Nugent as graduate students this semester.

"I'll give it to Virginia Tech. They're a great team," Williams said. "They brought back some guys who they didn't have last semester. That was like a little bit of a surprise for us. We know that we can still beat them. We have just as much talent as Virginia Tech. It was just all mental for us tonight. This is a huge stage to play on, especially as a freshman coming in, so I think the nerves got to us a little bit."

In the first game, sophomore middle hitter Luke Werth spiked a kill to bring the Flames back within 16-10 before the Hokies won the next four points, prompting Rigg to call a second timeout. Junior outside hitter Nick Williamson then made a perfect service-receive pass to freshman Eli Plasterer who set up Werth for a winner off a Virginia Tech block. However, Allen spiked a kill down the right sideline off a set from junior Mitch Ford and Hokies 6-5 junior middle hitter Nestor Payne hit a one-time winner on game point to prevent Liberty from generating much in the way of momentum going into the second game.

Senior middle blocker Sam Eisbrenner hit a winner down the right sideline to trim the Flames' Game 2 deficit to 16-8 and the teams traded service errors before Ford served a winner dug into the home crowd that helped put the Hokies back in complete control, up 23-11.

Liberty led for much of Game 3, going up 5-1 early on Williams' serve after freshman Josh Talamoa tapped a winner into a hole over a Virginia Tech block and junior middle hitter Si Hershberger's stuff block. Spike kills by Williamson and Talamoa and a quick-reaction winner by Hershberger off a saving dig by freshman setter Kaden Knepper kept the Flames on top 12-10.

"We had some great ups," Williams said. "Kaden played some really scrappy defense. But you can only do so much when they're tooling it off the block or there's holes in the block or we have single blocks on the outside."

Ford later set up a kill by Allen in the middle before setting backwards over the net for a winner inside the left sideline that gave the Hokies a 17-16 lead that they would not relinquish.

"We were looking at a different team in the fall, when we went back and forth with them," Rigg said. "They're probably going to be the No. 1-ranked team in the country again."

The first National Collegiate Volleyball Federation (NCVF) ranking of the spring season is due out this week, when the Flames hope to stay in the top 25 after finishing last spring ranked No. 24. They will look to move up the ranks by this year's NCVF National Championships, set for April 6-9 in Louisville, Ky.

"This was very good preparation for that," Rigg said. "That's the exact same thing they'll face when they're in a national tournament playing a top-five team. It is that mental game that wins or loses it." 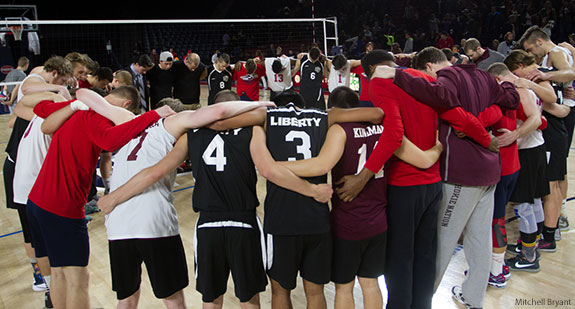 Flames and Hokies huddle together to pray after the 'Midnight Mayhem' match in the Vines Center.