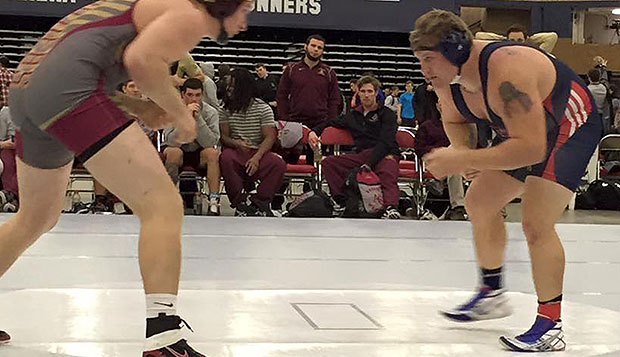 Liberty senior heavyweight Josh Travers went 2-0 in the tournament, including an 8-2 decision over Apprentice School's Steven Francisco in the final bout of the third-place match.

The fifth-ranked, second-seeded defending champion Flames placed third after having their quest for a third tournament title derailed in the semifinals by third-seeded Grand Valley State, which won seven of the first eight matches before forfeiting the last three in a 29-22 triumph.

Liberty, which dominated Penn State-DuBois, 39-8, in its quarterfinal match, conquered Mid-Atlantic Conference rival Apprentice School, 27-15, in the third-place final, repeating its third-place finish from 2014. The Flames also won in 2012, their first year at the NCWA level, and placed second in 2013.

"Taking third place here, like our fourth-place finish at the Virginia Duals, that's not too shabby," Liberty Head Coach Jesse Castro said, noting those are the only two dual-meet tournaments the Flames have this season. "You always want your guys to wrestle above expectations, but in the greater scheme of things, you want them to wrestle up to their level and we did that. We had some inexperienced wrestlers working their tails off, doing the best they could."

Grand Valley State, which won the 235-pound and heavyweight bouts to overcome a 21-19 deficit and defeat sixth-seeded Emmanuel College, 28-21, in the quarterfinals, lost to top-seeded Central Florida in the championship match, 32-18.

"Grand Valley was tougher than I thought," Castro said. "They were impressive. They've got a nice team, balanced from top to bottom. They're well-coached and well-conditioned. We definitely didn't wrestle as well as we could, but we didn't wrestle that bad. They just outwrestled us."

He challenged the Flames after their only loss in six dual meets over the weekend to not dwell on it, but use it as motivation to become more fundamentally sound and technically precise.

"After that match, I got together with the guys and had a long talk, to get them to put it in perspective," Castro said. "(The Lakers) didn't have bigger hearts; it's not that they tried harder or had more character. They were just technically better than us. We're good, but we have holes that are kind of glaring. We're green in some areas, inexperienced wrestling at that level. You can't get blood from a rock."

Liberty, which takes 22 bonus points into the March 10-12 NCWA National Championships in Kissimmee, Fla., based on its third-place finish out of 24 teams in the National Duals, next competes in a tri-match against West Virginia Tech and host Southern Virginia University, Feb. 3 in Buena Vista, before competing in the Messiah (Pa.) Open on Feb. 6.