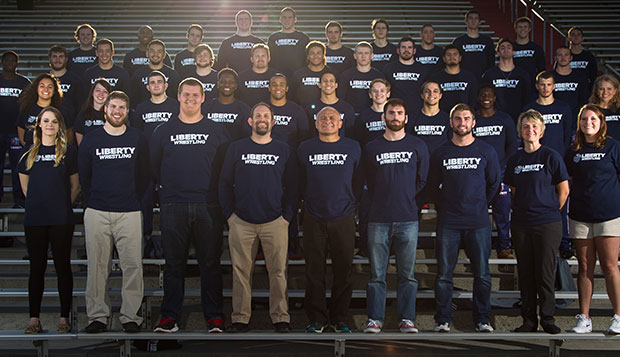 In its first dual meet competition of the season, following six individual tournaments in the fall, Liberty University's wrestling team experienced mixed results at the Virginia Duals, going 2-2 to place fourth in the American College division of the Virginia Duals at the Hampton Coliseum.

Liberty advanced to Saturday's championship semifinal against No. 1-seeded Kutztown (Pa.), the eventual champion. It lost that match, 28-15, but Flames Head Coach Jesse Castro was encouraged by his wrestlers' competitiveness, with Podell pinning Joe Esposito in 1:10 at 149, Ferenczy conquering Joseph Balboni by fall in 5:40 at 174 and sophomore heavyweight Evan Canady edging Christian Jenko, 3-2.

"I was actually very pleased," he said. "Kutztown is ranked No. 11 or 12 in NCAA Division II, so it's a pretty solid team and I thought we really battled well."

In the consolation semifinals, the Flames squared off against Mid-Atlantic Conference rival Apprentice School from nearby Newport News, Va., and steamrolled over the Builders, 44-9, paced by pins from Ferenczy in 3:16 over Chad Simmons at 174, Canady in 1:27 over Steven Francisco at 235, and senior heavyweight Josh Travers over Gino Saunders in 1:12.

"We got on a nice roll and beat them up pretty good," Castro said.

However, Liberty entered the consolation final against Central Florida with a bit of a handicap, forced to forfeit the 133-pound weight class after DiCesari suffered a rib injury while being pinned in the third period of his match against Apprentice's Aaron Bright.

In a rematch of last year's 23-15 NCWA National Duals tournament triumph, the Flames lost to Central Florida, 32-13, to finish fourth in the eight-team field.

Liberty was led by major decisions from Smith (13-3 over Nicholas Anthony at 141) and sophomore Cody Richmond (10-2 over Calvin Cook at 165) and decisions from Podell (6-4 over Matthew Seymour at 149) and Travers (4-2 over Luttere Eqiaus at heavyweight).

UCF had eliminated Ferrum College — a team the Flames will meet Feb. 10 in their only home match at the LaHaye Multipurpose Center — 24-21, in the consolation semifinals.

"This was our first dual tournament and there is not a lot of time before the NCWA Duals (Jan. 22-23 in Dalton, Ga.)," Castro said.

Next Saturday, Liberty will travel back to Hampton Roads to compete in the Ship Builder Invitational, hosted by the Apprentice School.