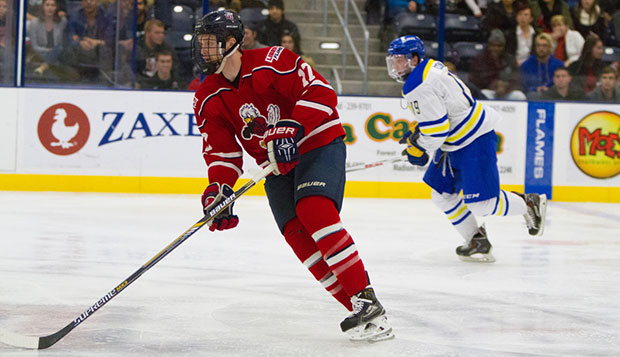 A near-capacity crowd on hand for the first hockey celebration of "Midnight Mayhem" cheered Liberty University's ACHA Division I men's hockey team to a long-awaited and much-needed 3-2 home victory over Delaware early Saturday morning at the LaHaye Ice Center.

"That was awesome," Flames senior forward Danny Logan said. "That was probably the craziest crowd I've played in front of here. You could hear them in the tunnels. It was a huge adrenaline rush and boost, especially with it being a midnight game. Guys aren't used to playing this late, but (the fans fueled) us the whole way through the game, so it was awesome."

After a moment of silence in honor of those who lost their lives in Friday's terrorist attacks in Paris, Liberty (4-7-1) gave its predominantly student body fans plenty to get excited about. The Flames scored three unanswered goals in the first period, capped by a shorthanded finish by junior forward Grant Garvin off a fast-break return pass from freshman forward Zechariah Roberts just 18 seconds before the first intermission.

"We were killing (a penalty) and I got the puck in the corner and me and (Roberts) battled hard and I was able to flip it up," said Garvin who chased down the pass to himself. "That never works, but it did. I batted it to him and it was a great effort on his part, too, he did an awesome job. He got it back to me and I just was lucky enough to put it in the back of the net."

Logan, who watched his diving rebound from in the right crease of a shot from the perimeter clang off the left post early in the contest, netted the game's first goal on a tip-in of a shot from along the left boards by senior defenseman Steven Bellew just over eight minutes into the action.

Freshman forward Owen Harris then finished a feed from Logan in the right crease off a secondary assist from his older brother, junior forward Chase Harris.

"I was just skating by the net and I heard Owen yell and I threw it back to him and he put it in, so it was a nice play by him," said Logan, who was denied by Delaware goalie Dylan Troiano seconds before on his shot from inside the right circle.

The victory snapped a six-game losing skid in their renovated home arena for the 18th-ranked Flames, who held off a late comeback bid by the 19th-ranked Blue Hens (8-4-2).

"It was kind of a weight off our shoulders for the past few weekends we've been down after the first period almost every game," Garvin said. "So it was good to come into the locker room after the first intermission and be up."

The Flames outshot the Blue Hens 33-29 on the night and junior goalie Matt Pinel made 27 saves. He was less than five minutes from posting his first shutout of the season when Delaware forward Cole Zucker lifted a wrist shot from inside the left circle into the upper netting. Then, after Liberty missed an opportunity to capitalize on a power play in the final four minutes, Blue Hens defenseman Justin Hoch fell down on a fast break but managed to leave the puck for trailing forward Dan Going, who put away a point-blank finish, trimming the deficit to 3-2 with 1:32 left in regulation.

"I don't think we let up in the third," Garvin said. "They got a couple good bounces and maybe off of a few of our mistakes, but for the most part, we played hard to the buzzer and everyone did really well. They were playing for each other tonight. We had a lot of penalties tonight, too, so everyone worked hard killing those."

That included a five-minute major assessed to senior forward Bram Erickson on a hard check into the boards midway through the second period. Zucker appeared to put away a rebound of a shot from the high slot by Delaware head captain Leo Skehan less than a minute into the power play, but it was called back due to high sticking. Pinel glove saved a shot from the top of the left circle by Matt Margolis in the final minute of the penalty and later robbed fellow forward Vincent Zingarelli's shot off a counterattack in the closing second of the period.

Delaware pulled Troiano for the final minute and a half of regulation to set up the man advantage and Pinel made a couple critical saves to preserve the one-goal triumph.

"That late rally was, obviously, you don't want to see that, but I was glad the guys held up tight and we managed to squeak it out," Logan said. "To get the first one in the new rink is super important. The guys battled super hard for 60 minutes and I'm proud of them, but it's a quick turnaround. We've got to get ready to go tomorrow. Hopefully, we can take another one (tonight) and get on a bit of a roll here."

Liberty battles the Blue Hens in the second game of the series Saturday at LaHaye, where the puck drops at 7 p.m.