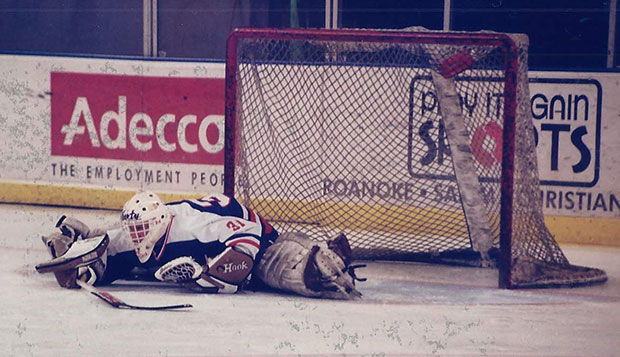 Corey Walyuchow started in net for the Flames from 1993-97, earning team MVP honors in the 1994-95 season when he also served in an interim coaching capacity.

Born and raised in Calgary, Corey Walyuchow arrived at Liberty University at a tenuous time in the hockey program's history.

During Walyuchow's sophomore year, then Head Coach (and inaugural Club Sports Hall of Fame inductee) Gary Habermas' wife, Debbie, was diagnosed with cancer and he was forced to step down prior to the start of the season to tend to her medical needs.

With the 1994-95 campaign in jeopardy, Walyuchow — Liberty's starting goalie from 1993-97 — stepped up to keep the Flames burning on the ice. He took it upon himself to serve as the team's administrator, by fundraising, organizing league paperwork and registration, arranging practice times, and scheduling games. He put in the work necessary to keep the program alive in honor of and out of friendship toward Habermas and his wife, who died in the summer of 1995.

For standing in the gap on the coaching staff when the team might otherwise have folded — not to mention his performance in goal, where he posted a 36-9-4 career record with four shutouts and a 2.38 career goals-against average (GAA) — Walyuchow was an obvious choice to join Habermas in the Club Sports Hall of Fame. He is one of three members of the second class to be inducted this Friday at the Hancock Welcome Center.

"I'm honored and humbled to have played a part in the development of the program and I'm excited to see where it's going," Walyuchow said. "It's amazing to be a part of something that keeps growing and getting better every year."

He will be presented for induction at Friday's ceremony by Craig Daliessio, filling in for another former Flames teammate Kirk Fritz.

"He was a good friend, and still is, a personal relationship that I've had for almost 20 years now," Walyuchow said of Fritz. "That's something I cherish about Liberty as well, the people I've met and lifelong friendships I've developed."

Walyuchow, who was a back-up goalie to Corey Hirsch for the Canadian Junior National team in the early 1990s, was named the Flames' team MVP that 1994-95 season. But his best season may have been his freshman year in 1993-94, when he went 12-1-2 and distributed five of his 13 career assists, showcasing his tremendous stick skills and accurate outlet passes. In regular-season action, Walyuchow was undefeated and boasted a 1.5 GAA before losing to Tennessee in the regional finals in overtime. He guided Liberty to a No. 5 ranking after starting between the pipes in its first national tournament victory in program history, a 5-2 win over Siena.

In his senior year, Liberty joined the Atlantic Coast Conference Hockey Association and Walyuchow went 10-4-2, earning first-team all-conference status. He started in net and was named "Best Goalie" of the ACCHA tournament after posting a 4-3 overtime win over Virginia in the semifinals and a 4-2 triumph over North Carolina, 4-2, in the finals, though Liberty did not receive a bid to nationals that year.

Since graduating with a degree in education in 1997, Walyuchow, now 45, has taught physical education and sports performance at a high school in Calgary, where he also serves as the JV football coach.

"Hockey has always been a passion of mine, and it will always be my passion, but my focus right now is with football," Walyuchow said.

Over the years, he has been active in Hockey Ministries International and has coached the Canadian Women's Junior National team's goalies in addition to coaching a local youth hockey team.

"Liberty was my stepping stone, a way to continue my passion to play hockey and it gave me an opportunity to continue my education and spiritual growth and development," Walyuchow said. "It helped me fuel my passion and gave me the tools to go on and fulfill both of those dreams — to get to the next stage of my life of coaching and teaching."

By following the example lived out by Liberty's professors and coaches, Walyuchow has had a greater influence on his students and athletes than just instilling knowledge and fundamental skills.

"Teaching young kids today, there's a lot of mentorship that goes on," he said. "In high school, I teach them more life lessons that they can take with them."

He and his wife Stacey have a 3½-year-old daughter, Foster, who is their pride and joy.

"I have a young family now so my main focus has shifted," Walyuchow said. "My family's become my No. 1 passion and direction. But I still live, eat, and breathe hockey as a true passion in life. That's what got me where I am today and keeps me moving forward."