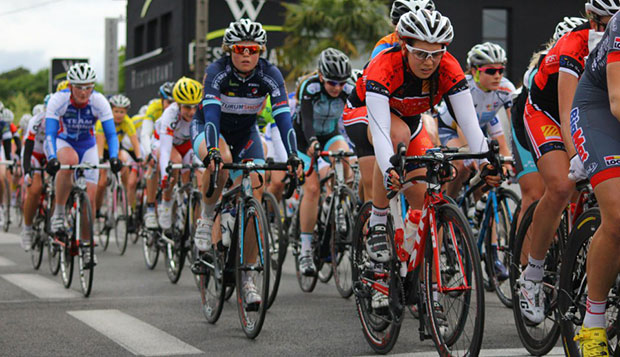 Sonnery-Cottet raced as a freshman at Milligan College in Tennessee, where she was a member of the 2015 Division II USA Cycling Collegiate Road National Champions.

The Lady Flames will begin competition in the Atlantic Collegiate Cycling Conference this spring and will have an opportunity to qualify for USA Cycling Collegiate Road National Championships, set for May 8-10 in Asheville, N.C.

"She's going to lead the way on the cycling team and give the men a run for their money," Liberty Head Coach Parker Spencer said. "She has the potential to win regionals and place at nationals, so I'm excited about the possibilities she brings to the table. She could take our program to a new level, give us some street credibility."

Unlike his sister, Thomas does not speak English. Fortunately, during his visit at the start of the semester, he was able to tour the campus with Liberty triathlete and cyclist Joseph Anderson, who speaks fluent French after living in Uganda with his military family.

"He would give Joseph a run for his money in the triathlon," Spencer said. "He said he really enjoyed his visit and when he friend requested me on Facebook, he was in a Liberty hat and T-shirt. His sister e-mailed me and told me that right now, Liberty is his No. 1 pick, so I'm excited about him joining the team next fall."