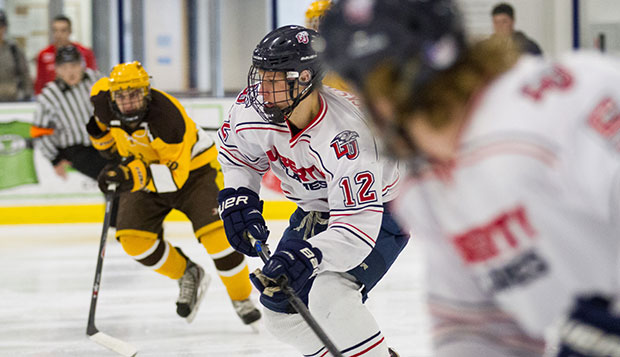 Junior forward Devon Docksteader scored two goals in the final five minutes of the second period to account for the difference in Liberty's 4-2 victory over Penn State in Friday night's first round of the Louisville Showcase.

Junior forward Devon Docksteader scored twice in the final five minutes of the second period, the first on a power play, to lift Liberty University's ACHA Division II men's hockey team to a 4-2 triumph over Penn State in Friday night's opening round of the Louisville Shootout at the Iceland Sports Complex in Louisville, Ky.

"They'll be a top-five team in the Southeast Region, so that was certainly a good win for us, probably the best win of the year so far," Flames Head Coach Chris Lowes said, noting Liberty knocked Penn State out of last season's Southeast Regional tournament in overtime. "Both teams respect each other's programs and have had some good battles in the past. We've been looking forward to this game and it's a great early test and great early result for our program."

Junior linemate and head captain Paul Ingles had tied the contest at 1-1 with a power play goal assisted by Docksteader and junior forward Ben Freymond with 3:16 left in the first period.

"Their line scored a five-on-five goal and two power play goals and I strongly believe they're one of if not the most dangerous offensive line in the country," Lowes said. "They've been together now for two years and it shows early in the season. We rely on them to have nights like this where they produce and they were a big factor tonight."

Sophomore goalie Connor Carew made 28 saves, including a key stop off a breakaway in the first period, and shut the Nittany Lions out in the third.

"The first period was really wide open, but only ended up tied at 1-1," Lowes said. "That was important for us to keep the game close. Surviving a chaotic back-and-forth period until both teams settled down allowed us to break away in the second period."

The Flames had two goals disallowed, one on an interference with the goalie and another on a delayed penalty assessed to both sides.

"They had some very good scoring chances, too, and that was Connor Carew's best period, when he stopped at least one breakaway and a couple other good chances," Lowes said.

"We felt we controlled the play a little bit, both five-on-five and on the power play," Lowes said. "We had two power play goals to their one, and outplayed them in special teams and even strength."

"To get that going into the second intermission was key," Lowes said. "That took away their momentum. They did get a penalty play goal but our PK was pretty solid all night. It's still early, but we're happy with the steps we took offensively, defensively, and in special teams. This is part of our season-long journey and we look forward to taking another big step tomorrow night."

The Flames will face tournament host Louisville in Saturday's second-round contest, set for 4:45 p.m. Then on Sunday at 10:30 a.m., they will playing Davenport, a late replacement for Florida Gulf Coast when the showcase was moved from Liberty to Louisville due to the nearly completed renovations at the LaHaye Ice center.

"Louisville's an up-and-coming team in the Southeast Region," Lowes said. "They're going to be very motivated to make their mark and get a couple season-defining wins."