Flames stay on target despite wind at 3D USIAC nationals 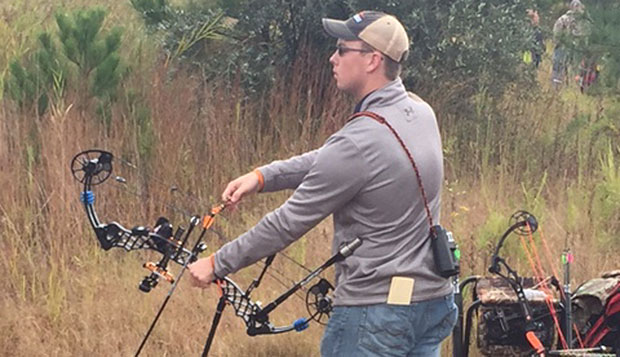 "The shooting conditions were poor the first day," Flames Head Coach Mitch Reno said of the event hosted by Southeastern Illinois College at the Sahara Woods State Fish and Wildlife Area near Harrisburg, Ill. "It rained and there were sustained winds of 15 mph and gusts much higher, so it was not a great day to shoot."

Archers from several NCAA Division I colleges and universities from across the nation competed in the two-day tournament, shooting at 3D targets ranging from deer, elk, ram, buffalo, and even alligator from known and unknown distances along the course.

Senior Ian Rigney, who has won five previous indoor and outdoor national titles in his career with the Flames, finished in a three-way tie for second place in the compound men's division with his first-day score of 197 and second-day total of 208. In a shootoff for third place, he lost by two points to finish fourth overall out of 24 archers in that category.

As a team, Liberty's compound men placed third overall, with the help of Hunter Jacobs, who shot a first-day score of 172 and had a second-day total of 210, the second-highest mark of the entire championships. Jacobs tied for 11th, just two points away from a top-10 finish. Flames freshman Dustin Garner also contributed to the team showing with his first-day score of 151 and second-day total of 176.

Liberty also entered teams in the men's and mixed bowhunter divisions, placing seventh in both.

"This was our first year in the team competition," Reno said. "We now have a blueprint with which to work and will be more competitive in future events."

In the bowhunter men's class, Flames senior Chris Britton, like Jacobs, was only two points shy of a top-10 finish, posting a first-day score of 186 and a second-day total of 192 to place 13th out of 45 competitors. Sophomore Jason Lynch came in 28th place by improving on his first-day score of 154 with a second-day round of 185. Senior Sam Hatcher, who was adjusting to a new bow that he'd only practiced with for one day before the tournament, recorded scores of 157 and 169.

Liberty junior Deanne Houseknecht also showed marked improvement from the first to second days, placing 23rd out of 37 participants in the bowhunting women's category with a first-day total of 118 and second-day score of 157.

In the recurve women's division, Lady Flames freshman Meredith Dessinger — a late addition to the team who had never shot on a 3D target range and only practiced for two days prior to the tournament — placed fourth overall, one point out of third, with a first-day score of 128 and second-day total of 148.