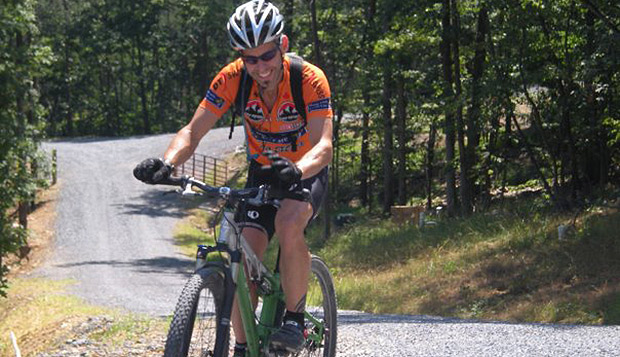 Van Phillips, one of two new Liberty assistant cycling coaches, is a mechanic at Bikes Unlimited who has raced mountain bikes, cyclocross, and road bikes and competed in triathlons.

"I'm really excited about having those two guys as our on-the ground coaches," said Spencer ('12), a former Flames triathlete and Exercise Science major who works as a personal trainer at Endorphin Fitness in Richmond. "I'm going to be developing the training program and communicating with the team members online. They're going to help take that program to another level."

Curlee ('96), an assistant professor in Liberty's Cinematic Arts, Zaki Gordon Center, has more than 18 years of racing experience in mountain biking, triathlon, and road and track cycling, earning a bronze medal in the 1997 Virginia State Championships.

"He's been to the (1992) Olympic Trials in cycling and he's going to be an immense help," Spencer said.

Curlee also directed and starred in "The Potential Inside," an Echolight Studios production filmed in Lynchburg about a professional cyclist who must balance his racing career with his family's needs and eventually turns to coaching.

"Scotty used to take me out and teach me how to draft," Phillips said, noting Curlee competed at Liberty and joined him in starting a cycling team in the early 1990s.

Phillips, one of the head mechanics at Bikes Unlimited in Lynchburg, used to coach elite cyclists for a triathlon training group in Hawaii, where he met his wife, Catherine, a former professional triathlete.

Besides taking team members out on weekend off-campus training rides — mostly  on rural routes in Amherst and Bedford counties, including the Blue Ridge Parkway — Phillips will help Liberty's cyclists to get properly fitted for their bikes, maintain their equipment, and serve as the team's on-the-road mechanic.

The Flames will compete in as many as 12 races during their debut next spring as members of the Atlantic Collegiate Cycling Conference. That's twice as many races as the triathlon team competes in each year and the schedule could expand with the addition of mountain biking races in the fall and off-road cyclocross events in the winter.

"The vision for the future is that we have a cycling program that encompasses all three," Spencer said.

Some of the triathlon team members, including Joseph Anderson who is returning as a graduate student, will also compete in cycling. Curlee and Phillips will be able to assist them in both sports.