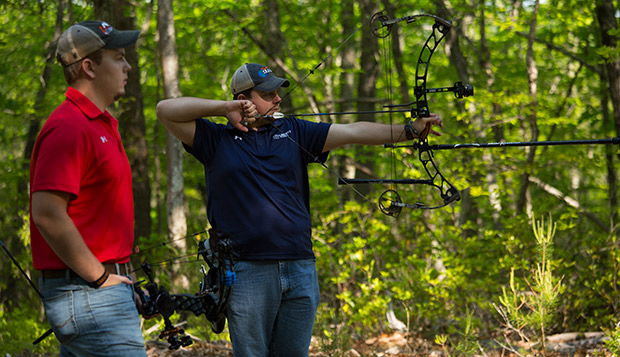 Practice makes perfect, as members of Liberty University's archery team have demonstrated consistently since the program's inception in 2008.

The Flames, winners of six individual and team championships at the past four U.S. Collegiate Archery (USCA) 3D Nationals, have sharpened their focus and raised their sights, targeting future titles by shooting nearly year-round on their 10-acre outdoor range on Liberty Mountain.

Located across the street from Camp Hydaway, the 3D course is open to team members from the beginning of February through the end of September. From October through January, open season for deer and other wild game, it is reserved for student bowhunters who have licenses approved by the Liberty University Police Department.

"We were asked to take our targets down for three months during bowhunting season, but we've got our spot back and all of our targets up so everybody's happy," Liberty Head Coach Mitch Reno said. "We're practicing over there twice a week. Most of the team members live around here, so they're going to shoot all summer to keep sharpening their skills."

Reno expects to have eight members back for the fall, including rising senior compound competitors Ian Rigney, Hunter Jacobs, and Chris Britton, but is eager to recruit more before the team travels to Illinois for the 3D National Championships in October.

"We're really pushing to try to get some more ladies to come out," Reno said, noting rising junior Deanne Houseknecht is the only female team member. "It would be huge to have two or three more."

This past winter, team members trained at an indoor range in Madison Heights to prepare for the USCA Indoor Nationals.

"We don't have a cleared area with targets on campus so we use the T.R.U. Ball facilities when we need to train on a range," Reno said.

Rigney, the two-time 3D national champion who placed third last fall before winning his first USCA indoor national title in March, likes the revised layout of the outdoor range. It has 20 deer and other animal replicas set up as targets along a 300-yard out-and-back course that follows an old logging road marked with orange ribbons.

"It's changed a lot from when it was on the other side of the mountain (near the new College of Osteopathic Medicine)," Rigney said. "It's a pretty tough and definitely a unique course but it's very usable. We've been cutting down lanes and pre-setting the targets to make it almost exactly like what we'll see at nationals. It helps in our judging distances because of the way the land is laid out, with hills and valleys. It's perfect for practicing and will help set us apart from other colleges who don't even shoot at 3D ranges."

Rigney, who was named president of the Staunton River Archery Club near his home town of Gretna, Va., last September, said Liberty's course should be open to the public and may host some competitions in the near future.