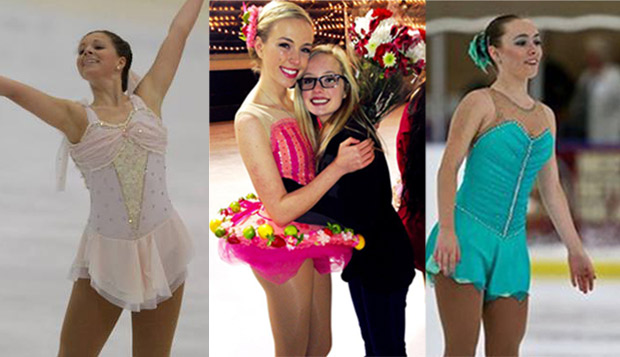 Never in the seven-year history of Liberty University's synchronized skating and figure skating teams has Lady Flames' Head Coach Tatiana Payne recruited a more promising class of skaters than she has on tap for the 2015-16 season.

"Our team is going to be amazing this year for both the synchro and figure skating teams," Payne said. "I am really excited about all that we have planned and all the freshman we have coming in. Skill-wise, this is not our largest but definitely our strongest class. There's a lot of depth there."

Currently, Payne has six confirmed incoming freshmen with five others planning visits. In late July, she will take a few of her more advanced returning skaters with her on a recruiting trip to Lake Placid, N.Y., where the synchronized skating team has competed at Eastern Sectionals the past two winters.

Among the highest-level new skaters Payne will have to work with are two from North Carolina — Cami Burkhardt, a senior-level figure skater and Cheyenne Peterson, who is coming in at the novice level but will possibly be moving up to junior along with rising Lady Flames senior Fantasia Remonvil.

Another incoming freshman is Katherine Thacker from Louisville, Ky., who started skating at the age of 8 after first competing in gymnastics. She is working on passing her Gold level Dance test and her Senior level Moves in the Field test by this summer and should help strengthen an area of the figure skating team the Lady Flames lacked expertise in this past season — ice dancing.

Before taking last year off from synchronized skating, Thacker performed for nine years with the Louisville Skating Academy and finished her last season at the open juvenile level, so she could complement Liberty's synchronized skating team as well.

That group should feature 16 to 19 members, making it the largest the Lady Flames have had. Teams can bring up to 20 skaters to a competition and skate with a maximum of 16.

Jennifer and Megan Gonzalez, twin sisters from Ohio, are two other high-level figure skaters who also plan to participate on the synchro team. Kailey Strode from Massachusetts, Catherine Bredshall from Ohio, and Morgan Simon from Minnesota will be joining the synchro team while Sibylle Harter, daughter of Lady Flames Assistant Coach Dawn Harter, will focus fully on figure skating.

"We have a lot of overlap this year," Payne said. "Because of our success in the spring season, we'll have quite a few synchro skaters looking to compete on the figure skating team as well."

The figure skating team, which placed seventh out of 23 teams in its final sectional meet at Delaware and finished ninth for the year out of 27 programs on the East Coast, featured a total of 20 figure skaters on the competitive and developmental teams this past year, including eight to 10 who competed in all three sectionals.

"This year, we may hit 25 to 30 total figure skaters, including 15 or 16 competitive skaters, so we're almost doubling the size of our figure skating and synchro teams," Payne said.

Fortunately, that growth coincides with the expansion of the LaHaye Ice Center, which will nearly double not only in seating capacity but also locker room space by the time renovations are completed in December.

"We should have enough room for 45-50 girls in our locker room by then," Payne said, noting last year, there were only 28 so some of the skaters had to share.

Payne said the synchronized skating team has already selected the theme and cut the music for its fall program and is in the process of designing its dresses.

"We will have the whole program laid out by the time students arrive in August, when we can see who we have and place them in their spots throughout the program," she said. "We're looking to do a choreography boot camp, Thursday through Saturday before school starts, to give them the opportunity to skate together before they really dive into the season."