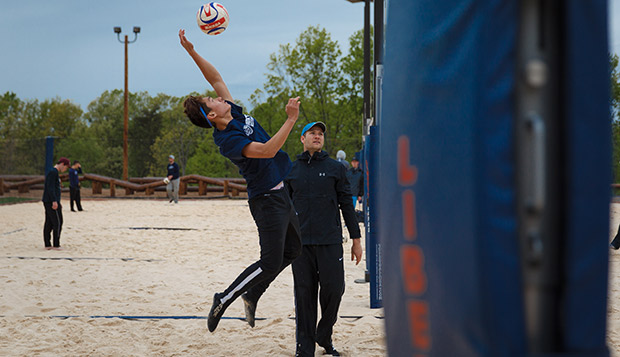 Seniors Kaleb VanDePerre and Ethan Chase teamed up to win the men's bracket, played on the courts past the intramural field complex, sweeping past senior Steven Fawcett and sophomore Aaron Brooks, 21-16, 21-15.

In the men's division, there were two pools of six teams who played five matches in pool play, with the top three from each pool advancing to the championship bracket and the winner receiving a free entry into the NCSVA Regional Championship of their choice. The winner of each division at those events will be awarded with free airfare to the July 25 NCSVA National Championships in Huntington Beach, Calif.

Besides Chase and Fawcett, who played for the Flames' indoor volleyball team this season, the Liberty's third-place team was made up of two former indoor players — Ryan Culkin, a graduate student, and senior David Hong, who tied for third with a team from Virginia Tech.

The women's final, played beside the Liberty Field Hockey and Lacrosse Complex, featured junior Samantha Evans and senior Tinsley Zentmeyer, who prevailed in a three-game match over sophomore Brittany Tyree and junior Elissa Mulcahy, 18-21, 25-23, 15-10. That was a rematch of their three-game showdown in the Class AA final of the Blue Sky Tournament in Apex, N.C., also won by Evans and Zentmeyer.

"It was a very fun match to watch," Liberty Head Coach Rachel Willis said. "Both teams are hard to score on. They're very scrappy, very defensive, and they get a lot of balls up. Both of their matches have been very hard-fought and tight and could have gone either way."

Lady Flames sophomores Morgan Horne and Jules Johnson, who lost to Evans and Zentmeyer in the semifinals, tied for third place with Lynchburg College's Jennifer Garrett and Amanda Perry.

Before hosting the Liberty Open on May 30, and traveling to regional events leading up to the NCSVA nationals, Willis will again coordinate a summer league, open to the public, high school, and collegiate players, starting this Monday from 6-10 p.m. on the courts beyond the intramural fields.

Registration, due this Friday, is $80 per tandem, with matches every Monday in May leading up to the May 25 Memorial Day Championship Tournament. Sign up online or contact Willis at rswillis@liberty.edu.