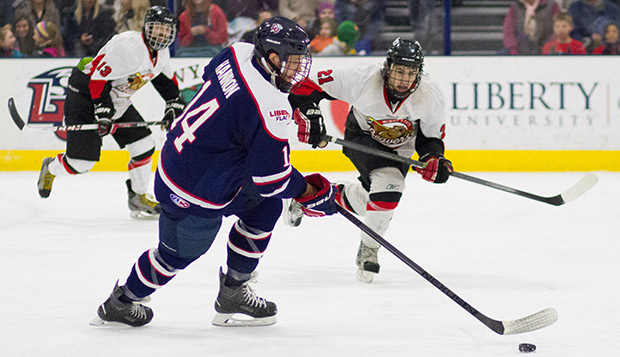 Featuring 19 home dates and 14 away games, the 33-game slate will be as competitive as ever. The Flames will start and end the season with weekend away and home series against 2013 ACHA DI national champion Minot State, the only other Independent school to qualify for this past season's national tournament field.

"It's one of the strongest schedules that we've ever had," Liberty Head Coach Kirk Handy said. "We always want to put our team in a great position to play against the best teams in the country on a consistent basis. This will be the first time in the history of the program that we'll actually be playing an NCAA Division I school."

The Flames will travel to Arizona State University in Tempe, Ariz., for a single game Feb. 12 against the 2014 ACHA DI national champion Sun Devils, who are transitioning to the NCAA DI level this year.

"It is exciting as they're only playing against three ACHA teams this season," Handy said. "It's a huge opportunity for our program and we're really looking forward to it."

Liberty will then conclude the regular season with Feb. 20-21 home games against the Beavers, who the Flames swept at LaHaye to end this past campaign, before potentially traveling to its ninth ACHA DI National Championships in 10 years, March 3-8 at the Edge Ice Arena near Chicago.

The schedule includes a couple home series against teams the Flames have never played — Rutgers on Dec. 4-5, the weekend of the second Club Sports Hall of Fame induction ceremony, and the University of Michigan-Dearborn on Jan. 22-23. It also features a couple schools they haven't met in a while — at Niagara on Oct. 16-17 and at home against Indiana University of Pennsylvania on Dec. 11-12. Liberty officially dedicated the brand new LaHaye Ice Center with a Jan. 21, 2006 contest against IUP.

Due to the ongoing renovations to the LaHaye Ice Center, the Flames will start their season a month later than usual, Oct. 2-3 at Minot State, before unveiling the new and improved arena Oct. 23-24 against Davenport in the first two games of the annual Blue & Gray Cup.

"It's going to be a really exciting place for us to play and for the fans to experience a first-class hockey facility," Handy said. "There's a lot of excitement about the teams we're hosting, as well as the team we're going to put on the ice with all of the new players coming in."

The next weekend, Oct. 30-31, Liberty will host Ohio, the team that ended its season for the second time in three years with a 5-2 loss in the second round of the ACHA DI playoffs, March 7 near Cleveland. It will then entertain ACHA DI runner-up Stony Brook on Nov. 6-7 and 2012 national champion Delaware on Nov. 13-14.

The Flames will conclude Blue & Gray Cup competition at Davenport on Nov. 19 before taking on 2007 ACHA DI national champion Oakland on Nov. 20-21 in the ONYX Ice Arena and later hosting the Grizzlies on Feb. 6-7. They will travel to Stony Brook for their first series of the spring semester on Jan. 9-10 before traveling to Ohio on Jan. 16-17 and Delaware on Jan. 30-31.